● Busch started fourth and settled into the third position early in the race.

● The M&M’S driver came to pit road on lap 35 and cycled out into third place after green flag pit stops were completed.

● Pitted for four tires and an air pressure adjustment at the conclusion of the stage.

● Busch restarted third and held the spot for several laps, telling crew chief Adam Stevens that his car had a much better balance.

● The Las Vegas native moved up through the field, taking the lead on lap 121 following a lap-119 pit stop.

● Following a caution on lap 138, Busch led the lap-142 restart, but fellow Championship 4 contender Kevin Harvick scooted by Busch on the restart and led the next 13 laps.

● However, Busch fought back and re-took lead on lap 157 and held the top spot for the remainder of the stage.

● Busch restarted the final stage in the lead, and while he did battle fellow JGR driver and Championship 4 contender Denny Hamlin for the lead, Busch was able to hold serve and lead 40 laps before making a scheduled pit stop on lap 210.

● After pitting for four tires and fuel, Busch cycled back into the lead on lap 223 after the leaders completed their final pit stops.

● Busch exerted a comfortable lead over Truex during the final 45 laps and crossed the finish line 4.578 seconds ahead of him.

● It was Busch’s 56th career NASCAR Cup Series victory, his fifth of the season and his second at Homestead.

● He is one of five drivers to win both a NASCAR Cup Series and NASCAR Xfinity Series title. Truex, Harvick, Bobby Labonte and Brad Keselowski are the others.

● This is Joe Gibbs Racing’s fifth NASCAR Cup Series championship. Prior to Busch’s 2015 and 2019 titles, the organization scored championships with Labonte in 2000 and Tony Stewart in 2002 and 2005.

● Busch led five times for a race-high 120 laps to bring his career laps-led total at Homestead to 463, the most among active NASCAR Cup Series drivers.

● There were three caution periods for a total of 15 laps.

“We have a great race team, a great owner and the best sponsors in sports. I just can’t say enough and thank everyone enough for this opportunity. I may be the one that’s able to hoist the trophy, or to have a championship, but it wouldn’t be possible without Adam Stevens (crew chief) and Joe Gibbs, J.D. Gibbs, Coy Gibbs and the whole family. M&M’s, of course, and Interstate Batteries and Norm Miller. And, Toyota – this TRD engine was awesome tonight. It’s been awesome all year. It’s so much fun to work with these guys and this group – everybody who puts it all together for me. There’s always your doubters. There’s always your haters. But, you know what? This one is for Rowdy Nation because you guys are the best. Thank you so much.

“Everybody always says you never give up and we’re no different and we just do what we can do each and every week, and sometimes we may not be the best and sometimes we may not have the right track position. Today, we had a really good car and I could race around and move around. That’s what’s so special about Homestead-Miami Speedway – the ability to put on a show. Kind of like we did there racing those guys. It was exciting from my seat. It was a lot of fun to cap off such an amazing year.”

The 2020 season kicks off with the traditional Speedweeks at Daytona (Fla.) International Speedway. The 62nd Daytona 500, the first points-paying race of the year, will go green on Sunday, Feb. 16, 2020 with live coverage from FOX and SiriusXM NASCAR Radio. 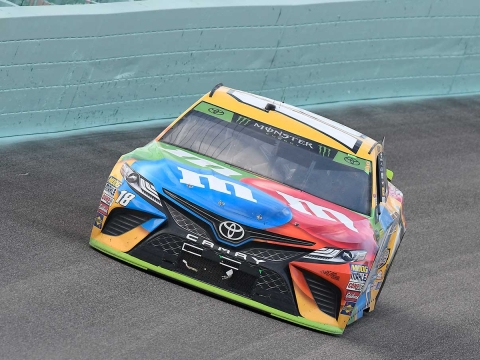