Aiming for Three at the Brickyard

So as the Monster Energy NASCAR Cup Series heads to historic Indianapolis Motor Speedway for Sunday’s 26th annual Brickyard 400, the driver of the No. 18 M&M’S Hazelnut Spread Toyota for Joe Gibbs Racing (JGR) will look to add himself to an elite list of stock-car winners at the 2.5-mile oval.

With his wins in the 400-mile race at 2.5-mile oval in 2015 and 2016, Busch became just the second driver to win back-to-back Brickyard 400s. The only other driver to do so is seven-time NASCAR Cup Series champion Jimmie Johnson, who accomplished the feat in 2008 and 2009.

There are relatively few winners of multiple Brickyard 400s to begin with in the race’s 26-year history. Just four drivers reside on that list, and Busch wants to add his name as the fifth driver to win at least three Cup Series races at the Brickyard. Busch hopes to one day catch five-time Brickyard 400 winner Jeff Gordon, who scored his wins in 1994, 1998, 2001, 2004 and 2014, and four-time winner Johnson, who sandwiched his back-to-back victories with his first win there in 2006 and his most recent win in 2012. Busch also looks to break his tie with Indiana native Tony Stewart, who won in 2005 and 2007, and Dale Jarrett, who won in 1996 and 1999, as two-time Brickyard 400 winners.

While Busch has an impressive 11 top-10 finishes in 14 starts at Indianapolis for an average finish of 10.7 – second among active drivers – he has always been a frontrunner there. But until he led the final 19 laps in his first Brickyard 400 victory in 2015, and a whopping 149 of the 170 laps in his 2016 victory, Busch had led just 42 laps there prior to 2015. In addition to his strong Cup Series record at Indianapolis, he also has three wins and four top-five finishes in the six Xfinity Series races he’s contested at Indianapolis. He’ll once again be running in Saturday’s Xfinity Series race.

This weekend’s Brickyard 400 also marks the final race of the regular season with the playoffs kicking off Sept. 15 at Busch’s hometown Las Vegas Motor Speedway. Busch can go for broke this weekend as he looks for his fifth win of the season. He clinched this year’s regular-season title last weekend at Darlington (S.C.) Raceway. The regular-season title means Busch will add 15 more playoff points to his current 30 bonus points accumulated this season, a total that can be carried throughout the playoffs.

So it goes without saying Busch would like nothing more than to enjoy the taste of M&M’S Hazelnut Spread, along with the taste of kissing the famous Yard of Bricks for a third time in his Cup Series career. While twice is nice, the third time would put him in elite company in stock-car history at Indianapolis.

“It is. It certainly was special winning both of the Brickyard races. I think that, for myself and the 18 team, winning there two years in a row was thrilling. It was really special as a whole team, and they treat it very special there, as well, with the whole ceremony postrace and everything that goes on there with taking the ride around the track and the owner being with you. J.D. (Gibbs) being there with us on that first Brickyard win was very special and a memory I will always have. That was pretty cool. It is a big deal. I feel like it is for us. For our team, we circle it on the calendar every year – that’s one we want to win. We always circle the Daytona 500, the Coke 600, the All-Star Race, the Brickyard 400, the Southern 500 and Homestead. We crossed another one off that list last year by winning the Coke 600. There are probably a couple more in there that you want to win, such as any one race within each round of the playoffs. You want to win any of those to get yourselves locked in and moving on to the next round just to solidify your chances of being able to win a championship. But it’s obviously a big race, and I guess it still pays pretty decent, so you might as well win it and we are going to try just that this weekend with our M&M’S Hazelnut Spread Camry.”

What makes the Indianapolis Motor Speedway so special for you as a driver?

“I think the biggest thing about the Brickyard is the prestige – the track’s history and quality of racing, all the historic finishes it’s had over the years, whether it’s been IndyCar or NASCAR. To me, it’s a special place to go to because of its heritage of being Indianapolis. Every guy in NASCAR, and especially every guy in IndyCar, they want to win there.”

What’s your favorite Brickyard 400 moment from either watching or participating over the years that didn’t involve you?

“I think my favorite moment from over the years, besides our win there, was probably the first one. I just remember Jeff Gordon being my favorite driver. It was his second full-time season in 1994, and he went to victory lane there in the inaugural race. I think that was pretty cool and pretty special for someone who grew up being a fan of Jeff Gordon.”

What does it mean to you to race at Indianapolis?

“Indianapolis is a really cool place. It’s got a lot of history. I know the history is not all NASCAR – most of it is IndyCar – but it’s one of America’s oldest speedways. The prestige of winning there is a big deal. It’s a unique place to race. If you are back in traffic, it’s a little more frustrating because it can be hard to pass there. But if you have a fast racecar, being able to cut the middle and get down the long, fast straightaways is important there. We’ve run well there the past couple of times.

Is there something you’ve figured out there, or have you just run well there?

“I think it’s a little bit of both. I think I figured a little bit of something out, but I also think that me figuring something out has helped us be able to develop our car better, too. Like, setup-wise, I know what I need within the car now that makes you faster at Indy than at what I had been running in the past.”

What is it about Indianapolis Motor Speedway that makes it unique compared to other tracks the NASCAR Cup Series visits?

“It’s very tight down the straightaways. You roll through (turns) one and two and there are people on the inside, there are people on the outside, there are people in the grass, just sitting along the back straightaway on the inside. You’ve got the golf course there and fans sitting on the hills underneath the trees. You start back up into turn three, with the grandstands going around (turns) three and four, and then down the frontstretch and, again, there are two tunnels. There’s a tunnel at the (turns) one and two side, and on the (turns) three and four side. There’s a center road that runs all the way through and then, coming down the frontstretch again, looking on both sides of you, you’ve got the pit road, which is really narrow and really tight, and the grandstands on the inside and the outside. So, you’re going down a ‘V’ of just people – a sea of people. Coming to the Pagoda and the media center, the way it is, and of course the scoring pylon being as tall as it is, you come down there and, if you’re leading the race, sometimes you can’t see that high, so you’re kind of wondering who is second and third, or who is behind you. It stinks when you’re running in the back because you can see yourself (car number) right there.” 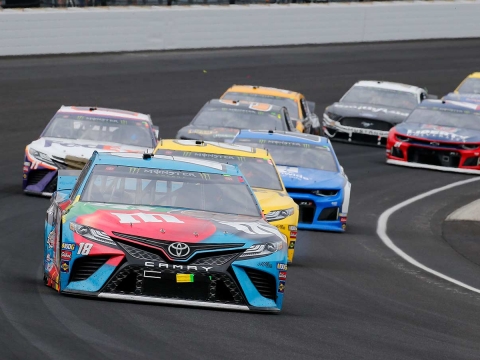 Race Recap for the Brickyard 400

Race Recap for the Bojangles' Southern 500