HUNTERSVILLE, North Carolina (March 23, 2021) – The NASCAR Cup Series heads to Bristol (Tenn.) Motor Speedway this weekend for its first of two racing events for 2021. However, this weekend is set to be different than any other time the series has competed there, for its half-mile, high-banked, concrete oval is now covered in dirt and NASCAR’s top series is set to compete on a dirt racing surface for the first time in more than 50 years during Sunday’s Food City Dirt Race.

For Kyle Busch, driver of the No. 18 M&M’S Messages Toyota Camry for Joe Gibbs Racing (JGR), one doesn’t have to dig too deep to find when he last competed on a dirt surface. In fact, it was just this past Friday and Saturday nights, when Busch took to the Bristol dirt oval behind the wheel of a dirt super late model for Double L Motorsports in the Karls Kustoms Bristol Dirt Nationals.

The Dirt Nationals appearance added to an already busy racing weekend for the two-time Cup Series champion, as he won the B-Main and finished 13th on Friday night at Bristol, then made a day trip down to Atlanta Motor Speedway Saturday to not only compete in the NASCAR Camping World Truck Series race for his own Kyle Busch Motorsports (KBM) team, but also brought home his 60th series victory. Following his Truck Series victory, Busch flew back to Bristol to compete in night two of the Dirt Nationals. The heats for Saturday night were conducted during the Truck Series race, so Busch was forced to make his way to the main event through the B-Main, and Busch did so by finishing in the runner-up spot. Busch then finished his busy day with an 11th-place finish in the main event but, more importantly, added some welcome experience on Bristol’s dirt oval in preparation for this weekend’s Cup Series race.

Busch capped off his weekend back at Atlanta with a fifth-place finish in Sunday’s Cup Series race.

While Busch has mostly a pavement racing background, he’s not a complete stranger to dirt-track racing. While he did run some dwarf cars, legends cars, and even modifieds on dirt as a kid growing up, he didn’t get back to the dirt until he participated in the Prelude to the Dream dirt super late model charity event at Tony Stewart’s Eldora Speedway in Rossburg, Ohio, from 2007 through 2012. In the final Prelude to the Dream event in 2012, Busch broke through and won against a strong field of competitors in a car prepared by dirt super late model stalwart Scott Bloomquist.

While dirt-track racing is a relatively new concept to NASCAR and its fans, they won’t be able to miss Busch’s familiar yellow No. 18 M&M’S Messages Toyota this weekend, with the scheme returning for the second weekend in a row. The message “I’m Not Competitive, I Just Hate Losing” will fittingly adorn Busch’s car this weekend, and he hopes NASCAR’s return to dirt will yield some strong results.

M&M’S Messages packs are featured in the beloved fan-favorite flavors – Milk Chocolate, Peanut, Peanut Butter and Caramel. Fans can find M&M’S Messages on shelves at retailers nationwide for a limited time, or they can order their favorite M&M’S Messages packaging design by visiting mms.com.

To further support the M&M’S Messages scheme, fans can tweet their favorite expression from one of 28 different M&M’S Messages packs available using the hashtag #MMSSweepstakes. The promotion, which will close at 9 a.m. EDT Sunday, aims to bring better moments and more smiles to the faces of M&M’S Racing and Busch fans across the country. As part of the promotion, select fans will be randomly chosen to win signed M&M’S Racing hats and diecasts, in addition to the grand prize – a signed piece of Busch’s No.18 M&M’S Toyota Camry.

So, as the Cup Series heads back to the dirt for the first time since 1970, Busch is hoping to send a message yet again that he means business by bringing home a historic win on Sunday afternoon.

What is your outlook on Bristol?

“For me, I’m not a dirt guy. I didn’t grow up like Kyle Larson. Kyle Larson is known as a dirt guy, but I did race dirt when I was a kid. I raced Legend cars, modifieds, all on dirt, and then pavement ever since. I did run the super late models on dirt with the Prelude races that Tony (Stewart) had years ago. I was able to finish first, second, third in a few of those, so it was pretty fun. Those cars are made for dirt. Every time people ask, ‘Why wouldn’t you race a truck (at Eldora)’ – these things are just so heavy, and the tire is not at all conducive to producing grip. It seems like it’s a full-fledged ice rink. Literally, you are just out there on ice, trying to make your way around the track. That’s why I’d never given much participation to it, but obviously now, I have no choice. It’s in the Cup Series, so we will go out there and give it everything we’ve got and see what we can do. Our team has really relied heavily on Kyle Busch Motorsports (KBM) as to what we’ve done with the trucks and the Truck Series with the success that we’ve had. We’ve won with Bubba Wallace. We’ve won with Christopher Bell. We could have won another one with Christopher, I feel like, but we had some things happen in that race. It’s just going to be a learning experience, for sure. These vehicles are nothing like I’ve driven on dirt, probably, so it’s going to be interesting. We’ll do what we can to get a good run with our M&M’S Messages Toyota.”

What is the importance of the heat races and the practices?

“I don’t know. I don’t really know what to expect. The biggest thing is just what the track is going to be, what state is the track going to be in. They talk about heavy, and in our team meeting yesterday, I was talking about heavy, and Christopher Bell looked at me and was like, ‘What are you talking about? The dirt race we had the other night, it was never heavy. He’s talking about mud getting plastered to your visor and you having to do tear-offs every straightaway, but the heaviest it was when we ran the other night was just little specks kind of hitting you on the visor. You can’t really have that with our cars, because you are just going to get mud on the windshields and then you are not going to be able to see. You don’t have the opportunity to pull visors, so it’s going to have to be more dry slick, more slippery through much of the event and you are just going to have to be ready for whatever conditions come on the track, knowing those conditions are always going to change. I don’t know if it’s really going to be much car and setup and stuff like that involved, as much as it’s just going to be the racecar driver and trying to figure out what lines your car works best in and making the most of the opportunity.”

Do the drivers with dirt experience have an advantage?

“The dirt guys, I would say, definitely have an advantage. The more experience you have on dirt, the more trust you have in what the vehicle can do on dirt and what your driving style is, or what your driving technique can be, and how you can trust the grip level that the dirt has versus what your car has. I think there are a lot of things the dirt guys can really pick up on. You always see in those truck races the guys who are good at it, that put some time into it, are better than the ones that do not. I can’t name them all, but (Kyle) Larson, Christopher (Bell), (Tyler) Reddick, even Bubba (Wallace). Bubba never really had any dirt experience, but he did a good job in the Eldora race for us. (Stewart) Friesen, I think he will actually do a really good job. He’s obviously known as a dirt guy. Those guys will shine, and I think they will be faster during points of the weekend, but I think it’s all going to be circumstantial on how it comes down to the end and what exactly happens toward the finish.”

Did Joe Gibbs Racing lean on Kyle Busch Motorsports with its dirt experience?

“Definitely. We were an open book as far as all the experiences that we have had with Eldora and the races that we’ve run on dirt over there. Setup stuff, I don’t know how much of that can be the same, but definitely some of the pieces and components, and the things that we would do in order to prepare for the dirt race. One of them is as simple as just knowing that you need a Swiffer in your car. The cars build enough dust and dirt and there’s enough static electricity on the windshield, the plexiglass, that it will pick up and keep the dirt on the inside of the windows, so you need something to clean off the windows under yellow. It’s just little stuff like that, that I think is imperative to your success at the Bristol dirt race.”

● Dirt Winner: The charity dirt late model race that Tony Stewart hosted at Eldora Speedway in Rossburg, Ohio, from 2007 to 2012 was where many NASCAR Cup Series drivers got their first taste of dirt racing. Busch competed in six Prelude to the Dream events in all. He started with a runner-up finish in his first attempt at the race in 2007. Busch brought home five top-five finishes in those six starts and capped it off with a race win in the final Prelude event in 2012.

● Owning the Dirt: While the Food City Dirt Race will be the first time NASCAR’s top series has competed on dirt in more than 50 years, the Camping World Truck Series competed seven times on the dirt at Eldora Speedway from 2013 through 2019. Busch did not compete in those races, but his KBM team not only competed but won on the flat, half-mile dirt track. Bubba Wallace brought home the victory for KBM in 2014, and former KBM driver and Busch’s current JGR teammate Christopher Bell won the 2015 edition of the race.

● It’s all for Charity: In addition to his participation in the Prelude to the Dream races at Eldora, Busch also helped former Cup Series competitor Kasey Kahne at his charity race at Williams Grove Speedway in Pennsylvania in 2009 and 2010. Busch competed in the super late model division in 2009 and 2010 in the “Battle at the Grove.”

● Making History: The last time NASCAR’s top series competed on dirt was on Sept. 30, 1970 in a race held at the North Carolina State Fairgrounds track in Raleigh. The half-mile dirt oval race was won by Richard Petty with Don Robertson finishing second.

In the Pits: Another unique wrinkle to this weekend’s Bristol dirt race will be the absence of the usual over-the wall pit crews. Teams will not be permitted to change tires, add fuel or work on their vehicles except during the breaks between stages. Exceptions will be made for vehicles involved in incidents. However, teams are not required to pit during stage breaks. Those that elect to stay on the track during stage intermissions will line up ahead of the cars that pit on the ensuing restart. There will be no race onto or off pit road, using a controlled pit-stop procedure similar to the previous format used in the Eldora Truck Series events. 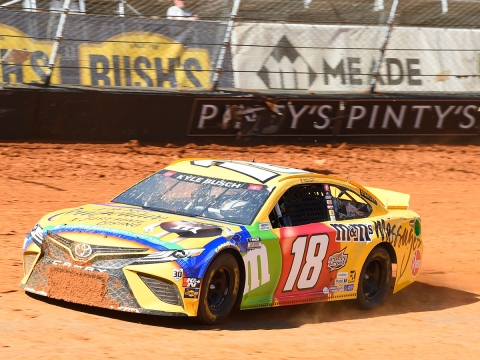 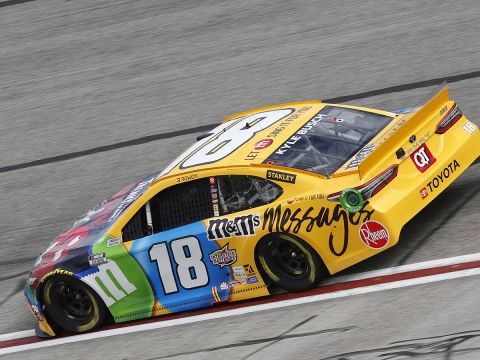