HUNTERSVILLE, North Carolina (July 7, 2020) – When it comes time to look at the statistics at Kentucky Speedway in Sparta, there’s a clear pair of drivers that stand out over the nine total NASCAR Cup Series races run at the 1.5-mile oval – two-time and defending Cup Series champion Kyle Busch, and 2012 champion Brad Keselowski. In fact, the two former champions have combined to bring home five of the nine wins at Kentucky since NASCAR’s top series began competing there in 2011.

Busch is always optimistic about his chances to win at one of his best tracks statistically, and he’ll look to score his third Kentucky win during Sunday afternoon’s Kentucky 400 and tie Keselowski for the most wins in the Bluegrass State. While Busch’s overall numbers there are impressive, a few statistics stand out more than others. To go with a series-best average finish of 4.7, he has an astonishing average mid-race position of just 2.6. With two victories in the nine races run there, Busch has only finished outside the top-10 once – 12th in 2012, when he battled mechanical issues. Keselowski has three finishes of 20th or worse at Kentucky with an average finish of 12.3.

The Las Vegas native and driver of the No. 18 M&M’S Fudge Brownie Toyota for Joe Gibbs Racing (JGR) has notched multiple victories at Kentucky in all three of NASCAR’s top divisions – Cup, Xfinity, and Truck. Add his 2003 ARCA series win at Kentucky and Busch has been victorious in four racing divisions and has made quite a Kentucky home of his own in the Bluegrass State’s second-most-famous victory lane.

The heavily worn racing surface and quirky Kentucky layout Busch navigated to win both Cup Series races there – including the inaugural event back in 2011 – is now gone after being repaved four seasons ago to go with a slight reconfiguration of turns one and two. Busch came painfully close to his third Kentucky win one year ago when he battled door-to-door with his brother Kurt, who ultimately inched past Busch in one of the most memorable finishes of 2019.

Busch’s winning history at Kentucky started way back at the ripe age of 18, when he dominated the 2003 ARCA race while competing for Hendrick Motorsports. He led a race-high 91 laps en route to the victory.

He returned the following year and found victory lane again, this time in his Xfinity Series debut. In all, Busch has three wins, nine top-fives and has led 877 laps in 11 Xfinity Series starts at Kentucky. He also won the 2011 and 2014 Truck Series races to give him six top-10 finishes and 310 laps led in seven starts there in that division.

So as the Cup Series makes a swing through the Bluegrass State Sunday afternoon, Busch’s fans are hoping he can bring home his M&M’S Fudge Brownie Toyota to his third career Kentucky victory and prove yet again that he is the best in the Bluegrass State.

What is it about Kentucky Speedway that suits you so well?

“I don’t know. People ask me that question about a bunch of different racetracks. It’s pretty nice to be able to go to these racetracks and be able to have the opportunity to do well and run well and finish up front and win. You look at Bristol, you look at Richmond, you look at Kentucky, you’ll see we’ve been doing a hell of a lot better and it’s been really good to go to these places and have the consistency that we need to run up front like that. Kentucky, though, when we first started going there, I remember going there in the ARCA days and the Xfinity days, back when the asphalt was old, rough and bumpy. Then they ground it a couple times and it kind of changed a little bit. I kept up with the changes, and then now it’s all repaved and we’re still trying to work in the surface a bit.”

What do you remember about last year’s Kentucky finish with your brother?

“It was a great finish to the race, just wish I was the one that came out on top. On the last lap, I knew I cleared him into (turn) three, and if I just stayed in the gas, I was never going to make the exit, I was going to plow the fence. Maybe I should have just gotten in front of him and messed up his air.  I missed my chance over there, I guess, and that’s about all I could really have done differently. Hoping we’ll have a chance to bring home a win this time around with our M&M’S Fudge Brownie Camry.”

What are your favorite moments at Kentucky Speedway?

“I have a few favorite moments, actually. The first time racing in the ARCA series, I won that race a long time ago. And then just a few years ago when I was able to win the race at Kentucky in 2015 during my championship season, just coming back from injury, and that was the first of three races we won in a row. We were able to pass Joey Logano that year late in the race and go on to win – that was a fun one, too. The track that year was really wide. We were running four lanes off the bottom and that never happened before. Going to take some more time to have that many grooves with the asphalt still being being relatively fresh there.”

How big of a challenge do you have with turn one and two versus a completely different turns three and four at Kentucky?

“I think the biggest thing we saw the last couple of years is that the groove goes from being so wide coming out of turn four and down the front straightaway, it kind of narrows up getting into turn one and the racetrack width narrows up, not to mention the groove is probably only one car wide. Then, on the other end getting into turn three, the track kind of widens out down there and you have plenty of room, but again it narrows down and there’s only one groove. Last year, it seemed, in turns one and two, the rubber laid down well but it was more of a challenge in turns three and four. We’ll see how it is this weekend.”

How does it feel to know you’ll always be the inaugural Cup Series winner at Kentucky for the rest of your career?

“I think it’s cool. You look at some of the new venues we’ve been to over the years and Jeff Gordon got to win a number of inaugural races, like the Brickyard, Fontana, and Kansas. He was always the guy who was known to figure out places the fastest, but we were able to be the ones to do that at Kentucky. There aren’t many opportunities these days to go to a new venue so, for us, being able to win the first race there was extra special, and we’ve really kept that going there by finishing in the top-10 in all but one race there. We’d certainly like to keep our record going there this weekend with our M&M’S Fudge Brownie Camry.”

Is Kentucky a special place for you?

“I love Kentucky. It was special there in 2011, when we were able to win the first Cup race there, and it stayed that way during our win there four years ago. I look forward to going back every year. It’s a pretty challenging racetrack. It used to be a place that lends itself to different kinds of setups because it was so rough. Fast lap times at Kentucky come from momentum. The place is so round that there’s not a ton of banking compared to some other 1.5-milers. It’s all about how round the corners are and just being able to maintain corner speed and stay on the gas. It’s a place we get excited about, for sure.” 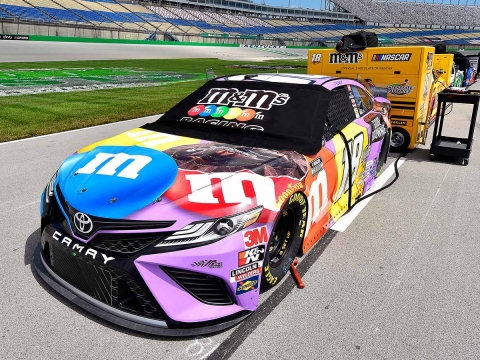 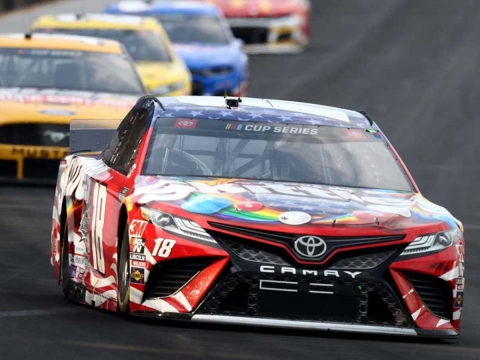