Note:  Race began on Sunday, but only 78 laps were run before rain postponed the remainder of the race to Monday.

● The No. 18 M&M’S Crunchy Cookie Toyota Camry lined up 10th for the start of the DuraMAX Drydene 400 on Sunday. Busch maintained a presence in the top-10 through the first 75 laps and was scored in ninth place when rain started falling around the Dover Motor Speedway. Rain persisted and forced NASCAR to postpone the restart to Monday at 12 noon EDT.

● Busch restarted the race in ninth place and noted during a caution that the tight-handling issue that affected the car’s handling on Sunday had continued to Monday. By the time the first stage ended the issue had exacerbated leading the team to make a series of adjustments during the caution. Quick pit work placed Busch in seventh place for the start of stage 2.

● The Las Vegas native was relatively quiet as Stage 2 unfolded. He noted that he was struggling with the right-front tire lacking grip which made it difficult to turn the car into the corners. Despite the handling issue Busch continued to make moves to the front of the field and took over the top spot on lap 212.

● Busch maintained the lead until a round of pit stops toward the end of stage 2. The team elected to pit for fresh tires and restarted the race behind a handful of cars that stayed out. Busch raced back to second place to finish the stage. This also placed him in the top spot to start the final stage.

● The two-time NASCAR Cup Series champion stayed in the lead until making a scheduled pit stop for service on lap 324. Caution waved while he was on pit road placing the No. 18 M&M’S Crunchy Cookie Toyota a lap down. He was able to take the wave around to get back on the lead lap and restarted the race outside the top-20.

● As the laps wound down in the 400-mile event, Busch raced his way back among the top-10. He was able to take over seventh place as the checkered flag waved, scoring the top-10 finish.

“I didn’t know what to expect today after yesterday. The car was just so tight and it was the same to start the race today. The team made some good adjustments on the M&M’S Crunchy Cookie Toyota and it was good. I think if it hadn’t been for that caution while we were on pit road then we definitely had a chance for the win. We were able to get seventh and would have liked more but we will take it and start getting ready for Darlington next weekend.”

The next event on the NASCAR Cup Series schedule is the Goodyear 400 on May 8 at Darlington (S.C.) Raceway. The race begins at 3:30 p.m. EDT with live coverage provided by FS1 and SiriusXM NASCAR Radio. 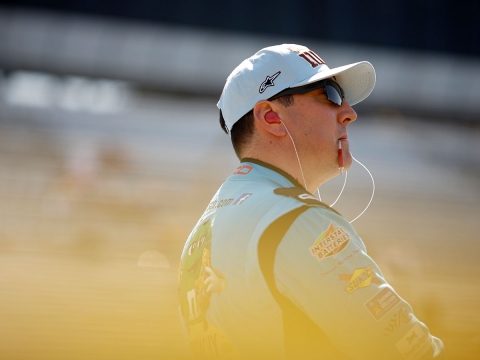