HUNTERSVILLE, North Carolina (July 29, 2020) – A quick look at Kyle Busch’s statistics at New Hampshire Motor Speedway in Loudon shows Busch and his Joe Gibbs Racing (JGR) team have been doggone good in the Granite State throughout his career.

Busch, driver of the No. 18 PEDIGREE® Toyota for JGR, heads into Sunday’s Foxwoods Resort Casino 301 looking for his first win of the season. What better place to bring home that first win of 2020 in NASCAR’s top series than at a place where he’s seen plenty of recent success with two wins in his last eight starts to go with four top-five finishes and six top-10s during that stretch.

The New Hampshire track affectionately dubbed the “Magic Mile” has certainly lived up to its billing for Busch over the years. In 2015, he and his team used hard work and a little bit of luck to bring home what would be his second of three Cup Series wins in a row during a summer hot streak that would ultimately springboard him to that year’s Cup Series championship.

The 2015 New Hampshire victory was Busch’s second Cup Series win on the 1.058-mile oval, the first coming in just his third start there in July 2006, and in dominating fashion as he led 107 laps. After that 2006 win, the Las Vegas native left with plenty of confidence that he could get multiple New Hampshire wins as his career progressed. As it turned out, he was winless there over the next 17 races, which included a number of near-misses.

Still, the driver of the PEDIGREE® Toyota posted five top-five finishes in those 17 starts between New Hampshire wins, including three runner-up finishes in a row in 2013 and 2014 before breaking through for the aforementioned 2015 win, and then adding his first playoff victory at the track in September 2017 after leading 187 of the 300 laps in an impressive performance. In all, Busch has 11 top-five finishes and 16 top-10s in 28 starts at New Hampshire.

The PEDIGREE® brand will be on board this weekend for the only time in 2020, as the brand uses its platform in NASCAR and other various sports properties to help dogs in need find a forever home through its adoption program, about which fans can learn more at PEDIGREE.com.

So, as NASCAR’s top series heads to the Northeast for Sunday’s 301-mile race, Busch knows he’s been doggone good enough to bring home his first win of the season and his fourth career victory in the heart of New England.

KYLE BUSCH, Driver of the No. 18 PEDIGREE® Toyota Camry for Joe Gibbs Racing:

How do you approach New Hampshire this weekend?

“I love going up to New Hampshire. I’ve got a lot of friends from the area. I’ve raced over at Thunder Road before. I’ve raced over at Oxford before, so I’ve been around this area a little bit racing the short tracks and stuff. It’s been a pretty successful place for us. We’ve won a couple of times there fairly recently. We’ve been kind of the car to beat, one of the guys to beat there for – I think about, I don’t know – the last two, three, four years, maybe. Sometimes guys really, really hit on it and they’re better than us and we’re just always consistently good there, so hopefully we can keep that pattern going, at least, and be consistently good there again, but maybe we can hit on it better than somebody else and try to win. Really happy to have PEDIGREE back on our car this weekend. I got to visit their offices near Nashville during Champions Week last year and they are huge supporters of our team.”

Was the racing any different at New Hampshire the last couple of years because it’s no longer a playoff track?

“It didn’t seem to be much different. I think that Loudon sometimes is a more challenging racetrack to pass people on, but we’ve had a lot of success there and I think we will again this weekend with our PEDIGREE Toyota. There is more time or opportunity for slipping and sliding and contact being made, being a short track, being a flat track. So maybe guys won’t care as much, I guess, because it’s not in the playoffs and they don’t really need notes to help them try and run better there when it comes to playoff time. We’ll see.”

The New Hampshire race is one of the shortest on the circuit. How do you approach that race knowing you might have a little less time to get to the front at the end?

“Essentially, at Loudon, you’re looking at how good your fuel mileage is and you have to look at when you have to make your last pit stop since that’s what everyone looks at. You end up running it almost like a road-course race because you do want to be the first guy on the last round of pit stops to pit. You want to get in there, get your tires and fuel, and then stay out the rest of the race and keep your track position since it’s so important there. It’s just a challenging race because it’s so hard to pass there. You can be two-tenths faster than a guy and not be able to pass him because everyone typically runs the same speed. You’ll have it where the leader might be a tenth better than the second-place guy, but everyone is separated by so little that it takes a mistake on someone’s part in order to pass them there.”

When you make a mistake at Loudon, does it cost you a little bit more because you have less time to recover?

“You don’t because you’re always on edge there. You’re trying to go as fast as you can into the corners, as deep as you can into the corners while rolling as much speed, or just a bit higher than everyone else so you are able to get back to the gas sooner. You’re going harder than everyone else in order to make the straightaway a little bit longer and get your momentum built back up. It’s definitely a challenging racetrack – not one of my best racetracks, I’ll admit that. I’ve won there twice so, if we get a good car – I guess I’ll need to have a really good car, apparently – then we might have a shot to win there.” 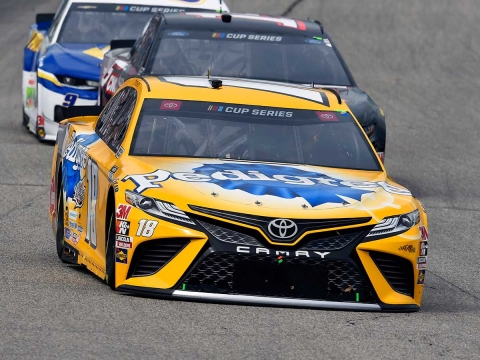 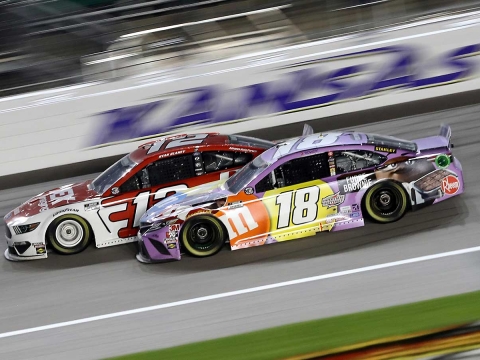