Everything is Bigger in Texas

HUNTERSVILLE, North Carolina (Oct. 29, 2019) – As the 2019 Monster Energy NASCAR Cup Series playoffs hit the homestretch with Sunday’s AAA Texas 500 at Texas Motor Speedway in Fort Worth, Kyle Busch and his No. 18 M&M’S Toyota team for Joe Gibbs Racing (JGR) know all too well that “everything is bigger in Texas.”

Why is that the case? With just three races remaining in the Cup Series season, Busch and his team are very much in the championship battle, and a win Sunday at Texas would punch his ticket to the Championship 4 showdown at Homestead-Miami Speedway in two weeks.

In each of his last four playoff runs, Busch and his M&M’S team have successfully followed their blueprint to the Championship 4 at Homestead by steadily advancing through each playoff round via solid finishes. With his sights on his fifth straight visit to the Cup Series finale as championship eligible, Busch has been able to survive and advance through the first two rounds and into the current Round of 8, despite not having the playoffs he had hoped for by his team’s lofty standards.

Busch heads to Texas this weekend hoping to bring home his fourth career Cup Series win there. He’s certainly been trending in the right direction at the 1.5-mile oval with seven top-10 finishes in his last 10 starts there. He has 27 career Texas starts with 12 top-five finishes.

Along with his three Cup Series wins at Texas, Busch been a frequent visitor to victory lane in most everything he’s raced there. He reeled off an incredible string of five consecutive Xfinity Series wins at Texas from April 2008 to 2010 and added four more for a total of nine Xfinity Series wins there, including in his most recent visit there in April. Add his four NASCAR Gander Outdoors Truck Series wins in November 2009, 2010, 2014, and 2019 and it’s no wonder Busch is feeling good about his chances of reaching victory lane yet again Sunday.

The Las Vegas native sits third in the playoff standings heading into Sunday’s second race of the Round of 8. Martin Truex Jr. punched his ticket to the four-driver, winner-take-all championship shootout at Homestead by virtue of his win at Martinsville last weekend. Now, Busch sits 17 points above the fifth-place cutline and will look to either solidify his position among the top four drivers in the playoff standings or, better yet, automatically punch his own ticket to the championship round with a win Sunday.

So while Busch and his M&M’S team look to add yet another signature cowboy hat and six-shooters as race winners in the Lone Star State to their trophy collection, Busch and his team will continue to follow the blueprint that got them to the Championship 4 during the last four playoff runs by shooting for at least a solid finish Sunday, but a win would certainly be bigger in Texas. If all goes according to plan, they once again may be the ones with a chance to hoist the Cup Series championship trophy down in South Florida in two weeks.

Looking ahead to Texas, did you learn anything from Kansas Speedway that will transfer over to Texas, especially when it comes to restarts?

“Restarts in (turns) one and two are certainly treacherous, just the way the banking is not quite there to hold you like it used to be. The track ends are very different in three and four, different than one and two. You kind of see, especially with the Xfinity cars with the lower downforce, they have a bit more issues. We’ve seen some late-race restarts and some problems for some guys in that race a couple of times and, for us, it’s no different. We also have some of the same issues. We learned some things I think at Kansas that helped our car and hopefully we can transfer some of that knowledge to Texas and Homestead, as well, with our M&M’S Camry.”

What does it mean to win at Texas and take some of the pressure off before Homestead? Can that be a detriment, as well?

“Certainly there’s some opportunity there to mess up or overthink things, but I believe any time you’re under pressure or under the amount of stress as what this round is to get yourself into the final four for Homestead, any time you can kind of take a step back and have a clear head is a good time, in my opinion. The pressure that sets in over these next two weeks if you’re behind the cutoff line and trying to get in or whatever, or if you’re right on the cusp of the cutoff line and trying to stay in, that can certainly wear on your team during the week. You try to have other things to do to kind of take your mind off of it a little bit but, overall, this is what we live, eat, breath, sleep, everything. It’s always on our mind.”

Do you have extra confidence knowing you’ve made it to the Championship 4 the last four years?

“I believe every year is a new year, but you certainly can’t forget what you’ve done and what’s gotten you to that point of being in the Championship 4. I do feel like the experience we’ve had and the times that we’ve been there, we can lean on some of that and some of those bullet points that have given us that success to be able to get to the final four and rely on that information over again. Some of these guys who haven’t made it there have made it to the Round of 8 but haven’t been able to transfer through. They’ve certainly learned some of the things of what not to do, but I feel like we just have to continue doing the things we know to do and hopefully that all comes to fruition.”

What’s it like trying to get back to the Championship 4 if you don’t win a championship the prior year?

“It’s a long time from championship to championship. It’s 365 days and it feels like an eternity when you look at it in a driver’s mind but, also from traveling so much, as much as we all do, it feels like a short time. We were just in Daytona, it feels like. This year, the JGR cars are good again, but you never know what is going to happen. It’s going to be a dogfight down to the end on whose able to bring it home and who’s able to get it at Homestead. It’s going to be an interesting battle, for sure, but I’d like to think we can fight them out all the way to the end and see where things fall.” 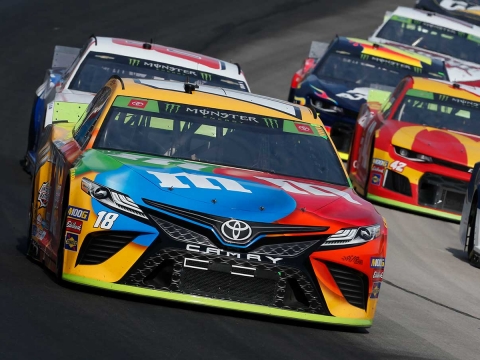 Race Recap for the First Data 500 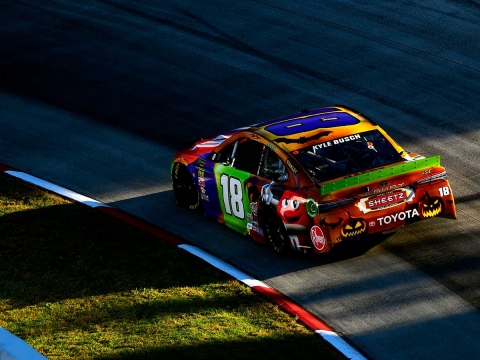