HUNTERSVILLE, North Carolina (Oct. 24, 2020) – Halloween is on the horizon and, for the first time ever, Kyle Busch will sport a special SKITTLES Halloween scheme in Sunday’s NASCAR Cup Series race at Texas Motor Speedway in Fort Worth, after bringing popular M&M’S schemes to the track for its October event during his 13-year relationship with Mars Wrigley and the M&M’S brand.

For this year’s Halloween season, Mars Wrigley has re-released Zombie SKITTLES in stores and online at major retailers nationwide. Zombie SKITTLES feature a spooky mix of flavors like Petrifying Citrus Punch and Mumified Melon. But there as catch, as there is also a hidden “zombie” flavor in each pack to attack unsuspecting taste buds.

As the 2020 NASCAR Cup Series season hits the homestretch with Sunday’s Autotrader EchoPark Automotive 500, Busch and his No. 18 Zombie SKITTLES Toyota team for Joe Gibbs Racing (JGR) know that there’s always a surprise around each corner at the tricky 1.5-mile Texas oval.

Busch heads there this weekend hoping to bring home his fourth career Texas win in the Cup Series. He’s certainly been trending in the right direction with nine top-10 finishes in his last 12 starts there. He has 29 career Texas starts with 13 top-five finishes.

Along with his three Cup Series wins at Texas, Busch been a frequent visitor to victory lane in most everything he’s raced there. He reeled off an incredible string of five consecutive NASCAR Xfinity Series wins at Texas from April 2008 to 2010 and added four more for a total of nine Xfinity Series wins there. Add his five NASCAR Gander RV & Outdoors Truck Series wins in 2009, 2010, 2014, 2019 and earlier this year and it’s no wonder Busch is feeling good about his chances of reaching victory lane yet again Sunday.

In addition to the Zombie SKITTLES scheme and product, SKITTLES created a socially distant Halloween costume, allowing fans to dress up as a pack of Zombie SKITTLES. The costume features a 6-foot-wide design and special “Zombie Mode” button that releases the smell of rotten zombie, sure to keep others at a distance. Fans can check out DareTheRainbow.com to learn how to get their hands on the costume.

So while Busch and his Zombie SKITTLES team look to add yet another signature cowboy hat and six-shooters as race winners in the Lone Star State to their trophy collection, Busch knows there could be a hidden surprise around each corner as he looks to bring home his fourth career Texas victory.

KYLE BUSCH, Driver of the No. 18 Zombie SKITTLES Camry for Joe Gibbs Racing:

What are your thoughts heading into the Texas race this weekend as far as what the track will be like?

“I know they’ve been working on the track, but you are still trying to put rubber down. With the smooth surface, it’s hard to understand what you’re feeling with your car because you can think you’re tight, you’ve got all the grip in the world, you’re going around the corner and then, ‘Boom,’ it just busts loose right out from under you with no warning. That’s why the older racetracks, the more aged racetracks – the Atlantas, the Californias – you’re sliding the whole time, so you’re already against the slide. You don’t have maximum grip. You’re already playing with it and trying to get the most out of yourself and the car that you possibly can. At Texas, you’re not just locked down, you’re locked in solid, then it can jump out from under you in a hurry. We were OK there last year but would like to have a good run there on Sunday with our Zombie SKITTLES Toyota. The scheme looks awesome this weekend and it’s cool to have SKITTLES get in on the Halloween schemes since we’ve done that with M&M’s for so many years. Zombie SKITTLES were very popular last year, so we’re happy they are bringing the product back and hopefully race fans will go out and buy them for Halloween coming up.”

What did you learn at Kansas Speedway last weekend that could transfer over to Texas, especially when it comes to restarts?

“Restarts in (turns) one and two are certainly treacherous, just the way the banking is not quite there to hold you like it used to. The track ends are very different in three and four, different than one and two. You kind of see, especially with the Xfinity cars with the lower downforce, they have a bit more issues. We’ve seen some late-race restarts and some problems for some guys in that race a couple of times and, for us, it’s no different. We also have some of the same issues. We learned some things I think at Kansas that helped our car and hopefully we can transfer some of that knowledge to Texas with our Zombie SKITTLES Camry this weekend.”

Do you approach Texas differently than other mile-and-a-half racetracks?

“They all have their different characteristics even though they are all 1.5-mile tracks. Texas is a really fast mile-and-a-half racetrack. Charlotte has been fast the last few years and Texas has always kind of been that way. You’ve got to be able to move around a little bit and run the middle, run the top and show some ability to go all over the racetrack. Seems like the track wears in a bit more each time we go there and I’m curious to see how it’s going to be this weekend.”

How fast of a racetrack is Texas Motor Speedway?

“It is a fast racetrack. Texas was really hard for me at the beginning with the Cup cars for some reason. I took to it right off the bat in the Xfinity Series stuff. We’ve kind of correlated some of that information back and forth and, having had the cars from Jason Ratcliff (Busch’s former Xfinity Series crew chief) and we’ve been fast there for a number of years ever since, even with the repave several years back. It’s a fun place. Texas, Charlotte and Atlanta all might look exactly the same, but they drive nothing alike. It keeps you on your toes.” 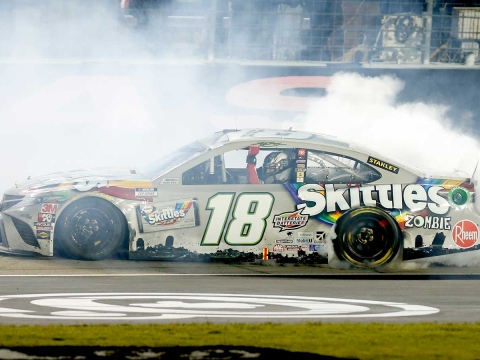 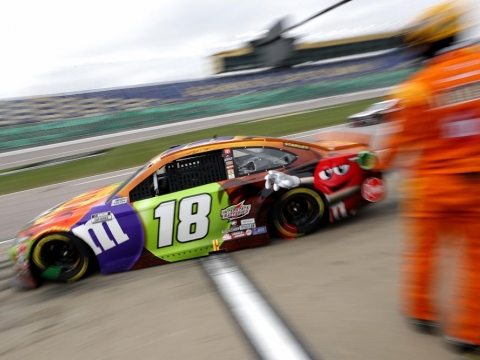