HUNTERSVILLE, North Carolina (Aug. 13, 2019) – When it comes to racing at the .533-mile Bristol (Tenn.) Motor Speedway, there’s arguably no current driver in the Monster Energy NASCAR Cup Series who puts on a show for the fans better than Kyle Busch.

When it comes to their commitment to the sport of NASCAR and its fans, there may be no sponsor that has shown it more than Mars Wrigley Confectionary U.S. and the M&M’S brand over its more than 30 years in the sport.

So it’s only appropriate, as the NASCAR Cup Series heads to Saturday night’s Bass Pro Shops Night Race at Bristol, that Busch will be competing for his ninth win on the .533-mile short track while primary partner M&M’S keeps showing its commitment to NASCAR fans by showcasing the second M&M’S Glampground of 2019.

The all-inclusive, branded glamping experience will provide race fans with a turn-key race weekend combined with the colorful fun that only M&M’S can provide. Located in Bristol’s Hospitality Village, the event includes 30 “glamorous camping” tents for fans, along with race tickets, prerace access and a number of activities and driver appearances, including a visit by Busch. The M&M’S Glampground came about as M&M’S was looking to give new and seasoned race fans an exclusive experience at NASCAR races. The Bristol event sold out in eight hours following a popular and sold-out first foray with the M&M’S Glampground at Kentucky Speedway in Sparta back in July.

On the racetrack, Busch will be coming off his eighth career Bristol Cup Series win that came this past April – the most among active drivers. The driver of the No. 18 M&M’S Toyota Camry for Joe Gibbs Racing (JGR) holds the distinction of being the only one in NASCAR history to win all three national series races in a single weekend, which he’s done twice at the Bristol bullring. Busch captured the “Bristol Triple” in 2010 and 2017 when he swept NASCAR’s Gander Outdoors Truck Series, Xfinity Series, and Cup Series races those years. In addition to his eight career Cup Series wins, which is tops among active drivers, Busch has notched 11 top-fives and 16 top-10s in 28 career starts at Northeast Tennessee’s “Thunder Valley.”

While he is a factor any time he travels to Bristol, it’s interesting to note Busch didn’t immediately take to the place. During his rookie year in 2005, he posted finishes of 28th and 33rd. But his record since then has been impressive, to say the least. After bringing home finishes of eighth and second in 2006, Busch captured his first Bristol Cup Series win in March 2007. The track was resurfaced after that race and, from 2008 to 2011, nobody has been better at the concrete oval than Busch. He scored four wins and six top-10s from 2008 until another change to the track surface prior to the August 2012 race weekend. Busch has seemed to recapture the magic from his four years of dominance there as the new racing grooves there have better suited Busch’s driving style over the past couple of seasons.

So, as Busch and the M&M’S team head to Bristol this weekend, both the M&M’S driver and his primary partners hope to yet again put on a show for the fans on and off the racetrack.

Bristol is arguably your best track. How do you feel going into this weekend?

“Obviously we’re kind of on a hot streak with Bristol. We love going there. I would like to think that we can go there, be fast and be able to respond, absolutely. So we’ll see what we can do getting there, and hopefully having a fast racecar and doing what we normally do there, just try to stay out of trouble. It’s a tough place to stay out of trouble. Looking forward to this weekend with our M&M’S Camry and hopefully we can make it another back-to-back wins there for us and keep making some progress in the points in the regular-season championship.”

What makes Bristol Motor Speedway so unique and a place that fans love?

“Bristol Motor Speedway is one of the best racetracks on the circuit. All the fans love it because of the excitement, the run-ins and the close-quarter action with all the cars being packed on top of one another at a half-mile racetrack with us 40 lunatics running around in a tight circle. With the fans, the atmosphere there always makes for a good time and sometimes a frustrating time when things don’t always go your way.”

You and your brother have strong records at Bristol – he has five wins and you have eight. What do you remember most about Bristol from over the years?

“I remember watching when I was a kid – I wasn’t there racing, yet – watching Kurt win his first race at Bristol and then having the epic battle with Jimmy Spencer there. That was a lot of fun to watch and see how Kurt was able to get his first win there and, of course, the years that I’ve been able to put cars in victory lane or wishing I could go back and get a few more of those wins that I missed out on – I’d have a heck of a lot more than just eight. I think nothing comes close to races in the fall of 2010 and two years ago when I won the Truck race, the Xfinity race and the Cup race all in the same weekend. That was awfully special to pull off with as many things as can happen there and as much carnage that can happen there. It certainly made for an awesome weekend and one for the record books. Doing it the first time was a bit more special, but doing it for the second time back in 2017 are great memories I’ll always have, as well.”

Do you think anyone will ever win another seven races in a row at Bristol, like Darrell Waltrip did from 1981 to 1984?

“No, I don’t think so. I think the way the sport was then is certainly different than the way the sport is now. When you hit on something back in that day, you might have been able to keep it at that particular racetrack for a lot longer than you can, now. The way that tech goes and the way you have to tear down your car at the racetrack and having people looking at it from not very far away, they can see what you’re doing and, then again, they go to the tech center and they pull apart the shocks and they pull apart the bump stops and they basically give away to everybody else what you’re doing. I don’t think you’ll ever see seven in a row at a particular racetrack again, but I could be wrong. Deep down, I would like to say that I could do it, but I know that, even with the team I have and the crew and the talent and everything we’ve got going on with the M&M’S car, that’s going to be hard to do. It’s fun to reminisce about those days and about what it’s all about but, sometimes you hear these comments about our sport. And they talk about how great it was in the ’70s or the ’80s, and you look at some of the results and there are eight cars that finish and the second-place car is three laps down and this guy has now won five in a row at a particular racetrack and it’s, like, ‘How is that the good old days?’ Is that really what would be exciting these days? I don’t think so. Not unless it’s your favorite driver, and there are a lot of fans out there who pull for different drivers.”

“I remember my first time. It was in an Xfinity Series car at a test session for Hendrick Motorsports. I remember I needed about 27 laps before I thought I was going to knock the wall down, with all the optimism and pumped-up feelings I had about going there. But after that, it’s been pretty fun. We’ve had some challenging times there, but also I’ve had some good times there. Looking to continue that there this weekend with our M&M’s Camry. What’s the highlight? You can’t dismiss the sweeps there. I would say that the first one was really, really awesome and really, really special, and the second one was special, as well.” 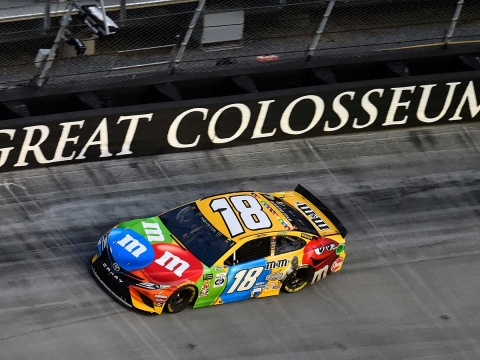 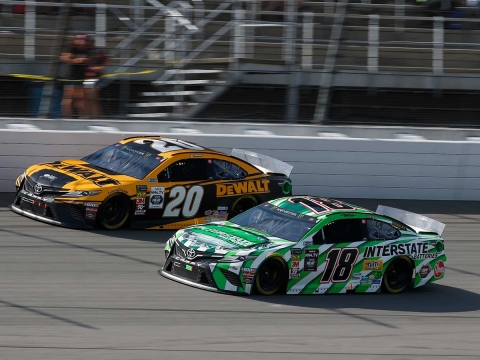