HUNTERSVILLE, North Carolina (Feb. 17, 2021) – It’s only the second week of the NASCAR Cup Series season, but Kyle Busch is already going for his first sweep of the season.

Busch, driver of the No. 18 Interstate Batteries Toyota for Joe Gibbs Racing (JGR), started off the season last Tuesday night with a win in the season-opening Busch Clash exhibition. How the two-time Cup Series champion ended up in victory lane was interesting, as leaders Ryan Blaney and Chase Elliott collided in the last corner and Busch snuck by from third place to bring home the checkered flag.

Busch has become a virtual veteran of the 14-turn, 3.61-mile road course that the Cup Series raced on for the first time only last August. The Las Vegas native has now competed on the Daytona circuit three times in the past 13 months. His first came in a completely different kind of car and race as he drove a GTD-class Lexus RC F GT3 sportscar for AIM Vasser Sullivan in the January 2020 Rolex 24. His next appearance was in the Cup Series race Aug. 20, when Busch ran up front but developed brake issues and a subsequent accident forced him out of the race early. And the third, of course, was last week’s victorious run in the non-points Busch Clash.

Sunday’s forecast at Daytona calls for sunny skies and temperatures in the 60s, but the weather in most of the rest of the country this week hasn’t been nearly as pleasant as it’s been in Florida. In fact, extremely rare winter weather even struck the Dallas-based headquarters of Interstate Batteries and the entire state of Texas. With Interstate Batteries returning to the No. 18 Toyota this weekend, Busch is encouraging fans living in areas of frigid temperatures to stop by a local Interstate dealer to get their vehicle batteries checked, as cold weather and snow have covered more than 70 percent of the country this week and can adversely affect your car battery.

Busch scored his fourth career Cup Series road-course win in June 2015 at Sonoma (Calif.) Raceway, and he heads to Daytona with 11 top-five finishes and 19-top-10s at the traditional road-course stops on the schedule with 34 combined starts at Sonoma, Watkins Glen (N.Y.) International, the Charlotte (N.C.) Motor Speedway Roval, and the addition last summer of the Daytona road course.”

So as Busch prepares for some road racing this weekend, he would like to accomplish a few things, including another tally in the win column for Interstate Batteries colors in the company’s 30th season with JGR, climbing the ladder in the record books as one of NASCAR’s best road-course racers and, of course, the Daytona road-course sweep of 2021.

What does it mean to come back to the Daytona road course for the second time with a Cup Series car and the third time for you in a little more than a year after your run in the 2020 Rolex 24?

“I think the whole allure of that place – getting up on the high-banked turns of Daytona in (turns) one and two and then the chicane and bus stop through the backstretch and getting back on the high banks in (turns) three and four – is unlike any other road course ever, anywhere. No other road course we can race on has banking like that. The allure of the speedway, I felt like, was always the main banking in one and two and three and four, and the tri-oval back to the turn one entrance. The speed you carried from the bus stop to the turn one entrance really lended itself to drafting and making moves with the draft and air. We certainly started the season off right last week by getting the win there. We are celebrating 30 years of JGR and Interstate Batteries together, so we would really like to get these guys to victory lane there and get the Daytona road-course sweep.”

The cars seemed noticeably faster to the naked eye without restrictor plates on the road course last weekend. What part of this course is the fastest for you?

“I think it’s into the frontstretch chicane, I’m not exactly sure, but I’m going to guess it’s right around 200 (mph), 203, something like that. We have the backstretch chicane we have to check up for and slow down, but we’re still carrying momentum through there. Then we’re getting back up into high gear. That is as far and long as we run high gear. So I assume that’s how fast we’re going. The biggest thing about the cars being faster last week is they had less drag on ’em. From last year’s package when we ran here on the road course race, more downforce, more drag, the cars took a little bit longer to get up to speed versus last week. I don’t know if lap times were necessarily faster or not.”

As a driver, is it better from your seat on the road course compared to the oval, where there’s a lot less in your control?

“I feel like there’s a lot more in your control. When you’re in a superspeedway race, a restrictor-plate race, there’s a lot less in your control. About anybody can win in those types of races. But when you have races like on the road course, it lends itself a little bit more to driver and car and setup and stuff like that. I think we kind of saw a little bit of that last week. There were a lot of comers and goers with tires and tire strategies that kind of got guys in the mix and out of the mix. Typically when you have a Daytona plate race, it’s anybody’s race, really. There’s a little bit of luck involved. Hoping we can come back this weekend and be on the right side of the strategy and bring home the win in our Interstate Batteries Camry.”

How do you rate yourself as a road-course racer?

“I think I’m pretty decent. I didn’t start out as good. A couple of other guys picked it up quicker than I did in my career. Like Chase Elliott, for instance, he’s a really good road racer right out of the gate. It took me a couple of years to kind of get going with it. I enjoy it. I like road racing. But it’s very hit or miss for me, sometimes. I can go to Watkins Glen and run top-three every single time, no problem. But when we go to Sonoma, it’s very hit or miss for us, for some reason. I can run top-three there one year and go back next year and be 10th. Same with the Roval, we just haven’t figured it out as a team and for me as a driver like the other places.”

“It’s definitely something you have to work on. With rule changes and tire changes, it’s something you work on every year. There’s always change that you have to work on to be competitive. When I was a kid back in Las Vegas in Legends cars, that’s where I was able to learn about shifting and turning left and turning right. I had the natural instincts for it and won a couple of championships in the winter series we had out there. We actually went to Sonoma back then and ran the national championship races two years in a row and finished third both times, so I had a little bit of experience on road courses as I came up through the ranks.”

● Unexpected Victories: The two-time NASCAR Cup Series champion’s win in last week’s Busch Clash on the road course was quite unexpected, as Busch sat third behind race leader Ryan Blaney and second-place Chase Elliott entering the final turn. This was not the first time Busch has gone into the final corner of a race in third place and found himself in victory lane. While his win last week was on a road course, Busch was running third behind Joey Logano and Denny Hamlin at Auto Club Speedway in Fontana, California back in 2013, when Logano and Hamlin made contact coming out of turn four, allowing Busch to power past both of them on the outside to grab the unlikely victory.

● Rolex 24 Experience: In preparation for his Daytona road-course race in the January 2020 Rolex 24, Busch spent several hours in the TRD simulator driving the circuit with assistance from British road racer Jack Hawksworth, who performed baseline runs. Busch attempted to match Hawksworth’s tire tracks on the simulator to learn braking zones and techniques for navigating the road course behind the wheel of the Lexus RC F GT3. However, the Lexus RC F GT3 features very different technology and braking capability, and it weighs much less than the Interstate Batteries Toyota Camry that Busch will drive Sunday.

● Not the First Time: Busch made his first career start on the Daytona road course way back in 2009 when he made a one-off IMSA start with Chip Ganassi Racing during the July race at the track where he started 10th and finished 10th with co-driver Scott Speed in a Daytona Prototype category. There was a span of more than 10 years between his starts as he returned to the Daytona road course for the aforementioned Rolex 24 last season.

● Road-Course Ringer: The Las Vegas native burst onto the road-course scene in 2008 as a constant threat to win as he captured all three NASCAR road-course races he entered that year. Busch started by taking home his first career NASCAR road-course win in the Xfinity Series race at the Autodromo Hermanos Rodriguez in Mexico City, leading twice for a total of 22 laps. He followed it up by capturing both Cup Series road-course events that year at Sonoma (Calif.) Raceway and Watkins Glen (N.Y.) International, leading 78 and 52 laps, respectively, for a total of 130 laps led in the two races.

● Sunday’s Daytona road-course race is the first of a ground-breaking seven NASCAR Cup Series races to be held on road courses in 2021. From 1988 to 2017, there were only two road courses on the schedule – Sonoma and Watkins Glen. The Charlotte (N.C.) Motor Speedway Roval was added in 2018, giving the series just three road-course venues. The initial 2021 schedule doubled that tally, with Circuit of the Americas (COTA) in Austin, Texas, Road America in Elkhart Lake, Wisconsin, and the Indianapolis Motor Speedway road course all being added. And when COVID-19 restrictions forced the cancellation of the series’ stop at Fontana, the Daytona road course was put in its place. 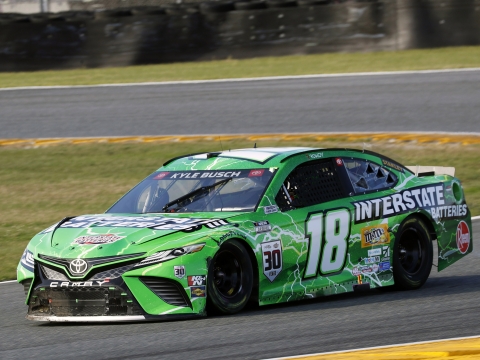 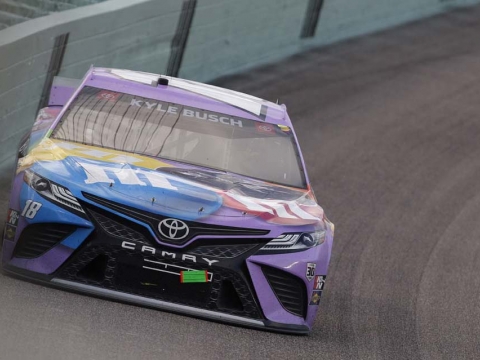