HUNTERSVILLE, North Carolina (April 28, 2021) – Over the last seven seasons, Kyle Busch has been in the mix for a win at Kansas Speedway in Kansas City more times than not.

This wasn’t always the case, though, for Busch, driver of the No. 18 M&M’S MIX Toyota for Joe Gibbs Racing (JGR), as he struggled his first seven seasons competing at the 1.5-mile oval. Busch will hope to record another strong finish at Kansas, a place where he struggled mightily during his first 14 visits, albeit on two completely different racing surfaces. However, looking at his past 13 starts in the Heartland of America, Busch has scored eight top-five finishes and 10 top-10s, an astounding turnaround from his early years there.

The two-time NASCAR Cup Series champion will be looking for his first win of the season and continue his recent string of strong runs at Kansas in Sunday’s 400-mile race. Busch will also have a bit of an added incentive on Sunday as he will be celebrating his 36th birthday. As a matter of fact, Busch became just the second driver to win a Cup Series race on his birthday when he found himself in victory lane at Richmond (Va.) Raceway in 2009. Three drivers total have accomplished the feat as Cale Yarborough won on his birthday in 1977 and 1983 and Matt Kenseth won on his birthday in 2012. Busch hopes to tie Yarborough as the only driver with two birthday victories.

The Kansas oval was built in 2001 and originally featured a constant 15 degrees of banking in the turns. But it underwent a massive renovation leading into its October 2012 event. The changes included repaving of the existing track surface, reconfiguration of the oval, and the addition of a new infield road course. The oval’s geometric shape also was changed to feature variable banking of 17 to 20 degrees in the turns.

To say that Busch didn’t take well to the new surface would be quite an understatement. From October 2012 to 2013, he had three consecutive DNFs (Did Not Finish) there, with accidents ending his day each time, for final results of 31st, 38th and 34th.

Feeling snakebit on the new Kansas surface, Busch and his M&M’S team took a different approach starting with the April 2014 race by starting from scratch with a brand new car. They attacked Kansas with the hopes that a fresh outlook would produce vastly different results. While a pit-road speeding penalty cost them precious track position and an even better finish in the race, the result and effort was much different than the three previous trips. Instead, they were competitive enough to turn the corner in terms of results.

In the October 2014 Cup Series race, Busch brought home a third-place finish at Kansas. Those who know Busch knows he has never cared much for moral victories. However, the momentum kickstarted by his first Kansas top-five has remained to this day. Finally, with the surface starting to wear, Kansas has become a place much more agreeable to Busch’s driving style as he brought home his first victory there in NASCAR’s top series in May 2016, putting an exclamation point on the aforementioned strong runs there and igniting a slew of top-five and top-10 finishes there ever since.

So as Busch heads to Kansas this weekend, there’s no doubt he’ll be in the “MIX”, as he aims not only for his second Kansas win, but to add a second victory on his May 2 birthday during his impressive career.

Have you looked forward to racing at Kansas more since you won there?

“I do. Also, I did even the last few times before we won there when we had some really strong runs. We finished in the top-five, I think, five races in a row and we have also been in the top-10 a lot, so it’s a place where we’ve really picked it up. Last year, at least in the first race, I thought we had the car to beat and ended up getting a speeding penalty that mired us back in traffic and we weren’t able to recover like we had hoped. We seemed to have gotten a setup or ahold of that place and hoping we can continue our strong runs and our fast pace of being able to have a shot to win with our M&M’S MIX Toyota.”

“I think the wind is usually a factor there. Sometimes it comes from the south, sometimes from the west, it’s like being in the Wizard of Oz. Kind of crazy to get there each year and try to figure out what’s best. But the wind also plays into our setups. We talk about how you have to set up the racecar with which way the wind is blowing and what we have to do from that aspect. It definitely adds a different challenge to what we all do.”

How are things coming along as you continue to work and gel with your new crew chief Ben Beshore?

“We are improving, for sure, with our baseline setup and being able to come off the truck better. At Vegas, it was a bit of a struggle to start, but we improved a lot and we finished well. Through all the things that we learned there and the debrief we had, we showed up to Atlanta way more ready to go when the race started with a good package there. With some of the stuff we learned there, we’ve even gone into some of the short tracks, the 750 (horsepower) races, even more prepared. It’s just week to week and trying to get better and come off that truck better to start the race. That way we are more able to get those points in the first two stages, I feel like we’ve had a lot of 11th- to 13th-place finishes in the first stage, but hoping we can get more stage points as we come off the truck to start the race better overall.”

Where is your team on the 1.5-mile tracks right now? Is it as important as it used to be with less of those races and more road courses than ever before?

“Years past, you definitely wanted to be good at the mile-and-a-half tracks because you always looked forward to Homestead as being the final race of the year. I think there were five out of 10 races with the 1.5-mile, 500 (horsepower) packages in the playoffs, where this year, now, some of that’s changed. You kind of have to look at the 750 package as being your main focus and priority and being better at those races. You still want to be better at both, though, being able to win now at Kansas and get those five bonus points and you hopefully can win some stages and get some stage points – that’s important. That’s basically what knocked us out of the playoffs last year, so we need to be able to get more of those earlier in the year. A lot of different winners with nine guys winning and those guys have those points, so we want to be part of that group and be at least equal heading into the playoffs.”

What do you see with your progress so far this year?

“We certainly want to get back to leading laps and contending for race victories, and we just haven’t quite had that yet. So far this year, I feel we are stepping in the right direction. We are probably in the fifth- to ninth-place part of the field right now and I think we are close to getting into that third through sixth, and then we can progress to leading laps and we can start talking about wins. Would like to be in the mix this weekend with our M&M’S MIX Camry and get those bonus points and give us even more momentum.”

● Breakthrough Win: After struggling for much of his career at Kansas, Busch came through with his first win at the 1.5-mile oval in May of 2016. That night, Busch led for a total of 69 laps and took the lead for good with just 37 laps to go. The breakthrough win at Kansas buoyed a top-five streak for Busch at Kansas where he recorded five consecutive top-five finishes from 2014 through 2017 and eight top-10 finishes in-a-row there from 2014 through 2018.

● All in the Stats: Busch has one win, eight top-five finishes and 12 top-10s and has led a total of 384 laps in 26 career Cup Series starts at Kansas. Busch’s average Kansas finish is 15.7.

● Double Duty: Busch is set to compete in both Saturday’s NASCAR Camping World Truck Series race and Sunday’s Cup Series event. The Truck Series start will be Busch’s fourth of the season, as he has one victory, which came at Atlanta Motor Speedway, along with two other top-two finishes with the victory in both of those races coming from KBM teammate John Hunter Nemechek. Busch’s final Truck Series start of the season will come at Pocono (Pa.) Raceway in June.

● Above 200: Busch will be aiming to add to his record 214 overall wins among NASCAR’s top series this weekend at Kansas. Busch has 57 Cup Series wins, 97 win in the NASCAR Xfinity Series, and 60 wins in the Truck Series.

● Start Me Up: With his two starts this weekend at Kansas, Busch will be just three races away from starting 1,100 races among NASCAR’s top three series. Currently, Busch has 580 Cup Series starts, 357 in the Xfinity Series, and 158 in the Truck Series starts for a total of 1,095. The only active driver with more overall starts is Kevin Harvick, who has 1,198 heading into this weekend. 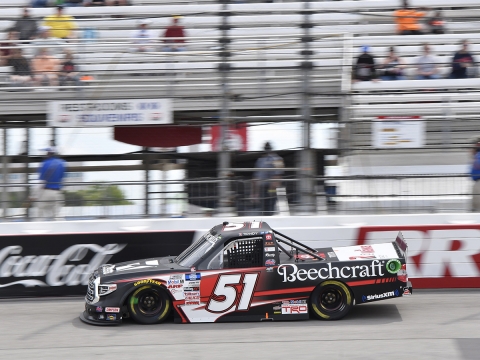 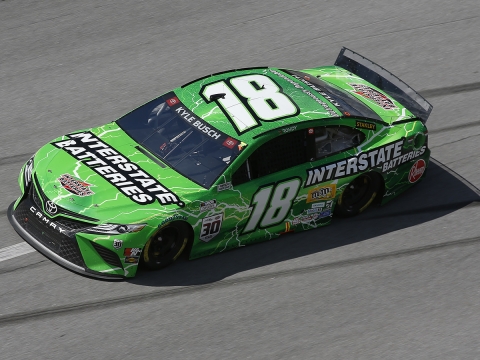