Note:  Race extended 13 laps past its scheduled 400-lap distance due to a green-white-checkered finish.

● The M&M’S Red, White, and Blue driver started fourth and was in the lead by lap nine. He was being challenged for the lead on lap 47 when he was pushed up the track. This caused the car to break loose and sent Busch spinning. The damage was minimal which allowed him to continue in the race. Handling however quickly became an issue.

● After earning the free pass to get back on the lead lap, Busch was able to run a steady pace to finish the first stage in 17th place. He started the second stage in 13th place and was back among the top-10 by lap 115. The balance of the car however shifted to the tight side, which resulted in the M&M’S Red, White, and Blue Toyota dropping out of the top-10. For the next several laps Busch raced between the 11th and 15th positions.

● Caution waved on lap 165. Rather than just riding between 10th and 15th, the team elected to make a significant change to the car by adjusting the front shocks. This required an extended stay on pit road and placed Busch in 25th for the restart.

● As the race continued so too did the issues on the No. 18 Toyota with Busch noting that adjustments made had done nothing to improve the handling. The team was however able to leverage strategy to place Busch back in the top-five to start the third stage. He was in sixth place when caution waved on lap 255. After an issue slowed the pit stop the crew chief called for the team to once again make some major changes to the M&M’S Red, White, and Blue Toyota.

● The two-time NASCAR Cup Series champion reported around lap 280 that the handling on the car made it feel like he was going to wreck. Busch was in 12th place on lap 292 when the car did come out from under him. He was able to keep it straight to get to pit road for service. The team changed four tires and sent him back onto the track one lap down in 24th place.

● With less than eight laps on their tires, the team elected to stay out at the end of the third stage. This placed Busch back on the lead lap. He was able to pick up positions when green-flag racing resumed but it was a slow process making it only to 16th by lap 320.

● The Las Vegas native stayed in it and made his way to the top-10. A late race caution set up the first attempt at a green-white-checkered finish. Busch restarted seventh and had to take evasive action to avoid the accident that unfolded amongst the leaders. This set up the second attempt at an overtime finish.

● The No. 18 M&M’S Red, White, and Blue driver lined up third for the restart, directly behind teammate Denny Hamlin. The teammates traded the lead a couple of times during the final two laps until Busch finally settled in behind Hamlin, going on to score the runner-up finish.

“I don’t think there is anything else we could have done at the end. We didn’t have a good enough day to even be in that position, so it was just a strong fight all night by this M&M’S Red, White, and Blue team. I give honor to those we remember on Memorial Day weekend. I appreciate the opportunity and being able to do that. We had Sergeant Thiem on here with us this weekend. We tried to come with victory lane, and honor him, but unfortunately, one spot short.”

Next Up: The next event on the NASCAR Cup Series schedule is the inaugural Enjoy Illinois 300 presented by TicketSmarter on Sunday, June 5 at World Wide Technology Raceway near St. Louis. The race starts at 3:30 p.m. EDT with live coverage provided by FS1 and SiriusXM NASCAR Radio. 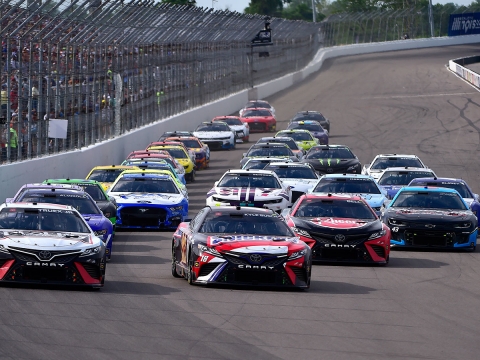 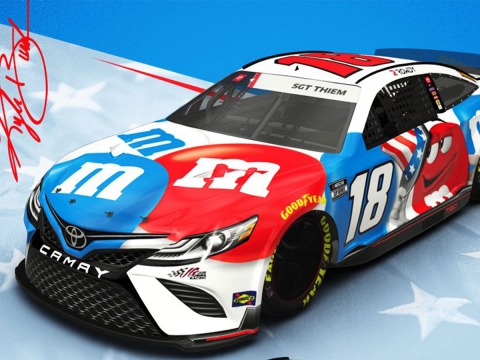