● Kyle Busch, driver of the No. 18 Interstate Batteries Toyota Camry, finished third in Sunday’s GEICO 500 from Talladega (Ala.) Superspeedway.

● Busch started 12th and hung up inside the top-10 until lap 10 when he decided to drop towards the back of the field.

● The Interstate Batteries driver hung within the top-20 over the course of the first two stages, as he avoided damage despite being close to multicar wrecks on lap 58 and lap 88.

● After finishing fifth in Stage 2, the two-time NASCAR Cup Series champion pitted on lap 122 to take on four tires and fuel, as the Interstate Batteries over-the-wall team performed a quick stop and got Busch out in second to start the final stage.

● Busch lead for a few laps before settling into the third spot with 50 laps remaining in the race.

● However, Busch was shuffled out of the draft on lap 153, falling down to the 22nd spot.

● Despite the setback, Busch steadily worked his way back up through the field again, moving up to the 13th spot by lap 172 and up into the top-10 with less than 10 laps remaining.

● The Las Vegas native found himself still inside the top-10 on the final lap, as he used a move on the inside line to sneak around a few cars who made contact ahead of him to bring home a solid third-place finish with a mostly undamaged racecar, which can be tough to do at Talladega.

“It was just hard to pass all day. Really there at the end if two lanes were formed and they were pushing, there wasn’t really enough for a third lane to form to get any speed going. It was just kind of a stuck in line, if you will, in the first few lanes, but overall, the Interstate Batteries Camry performed to the best we could. We got up front there and we got shoved out of line. Every time we got up front, we got shoved out of line. That was frustrating. Thankfully we were able to salvage and get back some of those guys that were getting a little bit squirrely at the end and get ourselves a P3, so we will take it and go on.”

The next event on the NASCAR Cup Series schedule is the Dover 400 on May 1 at Dover (Del.) Motor Speedway. The race begins at 3 p.m. EDT with live coverage provided by FS1 and SiriusXM NASCAR Radio. 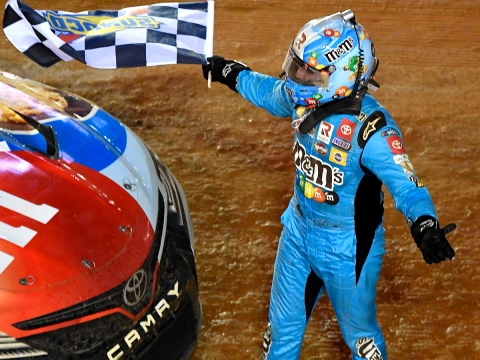