● The Interstate Batteries driver led the field to the green flag as light rain started to fall across the New Hampshire Motor Speedway.

● Busch maintained the top spot despite reporting that the rain had started to pick up.

● It was on lap seven when the No. 18 Interstate Batteries Toyota Camry broke loose due to moisture on the track as Busch drove into turn one. He made hard contact with the outside retaining wall.

● The two-time Sprint Cup champion brought the car to the attention of the team. The damage to the back end of the car was severe, ending the team's day.

“We started the race under a mist. It never should have gone green to begin with, but then it kept getting worse and worse, lap over lap. The lap before, I went into (turn) one and it shoved the nose really bad. I was able to keep it under control. It wasn’t bad enough. The next time I went down there, I lifted at the flag stand – maybe a little past the flag stand – and just backed it in. We’ve been talking about it for two laps that it was raining. I hate it for the team, Interstate Batteries and everyone on the 18 car. It shouldn’t have happened.”

The NASCAR Cup Series goes on a two-week summer break as broadcast partner NBC covers the Summer Olympics in Tokyo. It returns to action on Aug. 8 with the Go Bowling at The Glen road-course race at Watkins Glen (N.Y.) International. The event starts at 3 p.m. EDT with live coverage provided by NBCSN and SiriusXM NASCAR Radio. 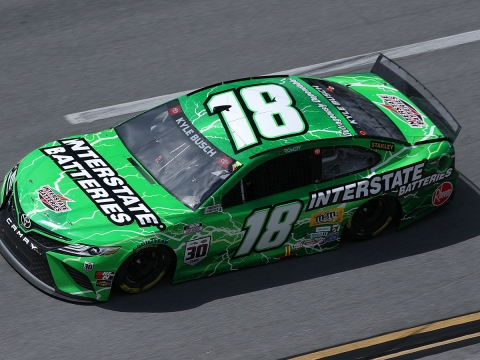