What was your car missing tonight?

“We just got too tight on the long runs in the center of the corner. The Supra was pretty good for about 30 laps and then it would just start dying off on tires and I couldn’t wrap the bottom anymore, I would have to slow down too much to keep it low and was just losing pace in the middle of the corner. Losing pace in the middle of the corner means you have to have more use of the rear tires to get off the corner and then everything just goes bad. I knew I couldn’t run any harder to go run with the 7 (Justin Allgaier) and the 11 (Justin Haley) there in order to keep up with those guys because if I did, I would smoke the tires earlier. I just did all I could to kind of ride it out and see what we could do and if they would race each other hard enough to fall back and they never did. Just missing a little car mechanic stuff and hopefully we can fix it.”

What kind of feedback can you give Joe Gibbs Racing after tonight’s race?

“I don’t know, maybe the tire has just been throwing us off all year long and throwing me off a little all year long. It’s a different feel, that’s for sure. Trying to wrap my head around it anyways. Can’t say enough about Starburst Duos, this is a M&M’s/Mars Wrigley confectionary product so it’s pretty cool to have their name on this Supra for the first time. It’s a bright, cool, beautiful paint scheme. Wish we could have got up there closer to the front and battled those guys for a win. We were close, but I knew if I pushed any harder there in the runs in order to get there that I would just have nothing at the end. Tried to go with about 18 (laps) to go there and get a little bit closer and was able to knock off a half-a-second at least, but that was it and she was smoked after that. Nothing left.”

Was it good to add this race to the schedule considering you could work with Jacob Canter tonight ahead of tomorrow night’s Cup race?

“All things considered I guess it worked out as good as it could possibly work out. Overall, just worked with Jacob (Canter, NXS crew chief) now for a few races this year and we’ve done alright and have had some decent cars. Not ones that were contending for wins with. Phoenix was kind of close, today was kind of close, but just getting beat. Overall, we’re missing a little something there. I’m not sure what it is, but if we can continue to improve and work on that. I tried to talk to many of those guys after the race and give them some help on what things to look at in simulation and get ready for tomorrow. Good day to try to work with him here in order to setup for tomorrow.”

Did Jacob focus on the Xfinity car this week or the Cup car?

“He’s (Jacob Canter) solely focused on Xfinity car. He probably doesn’t know anything about what’s in the Cup car. There will be enough communication available to us with Adam (Stevens, Cup crew chief) that Adam will be making the calls, don’t worry.”

Does your lack of dominance tonight say something about the competition level in the Xfinity Series?

“We were decent, but we certainly weren’t great. If we had a great car then I would say, ‘damn, we just got beat.’ Our handling and our balance was off that we didn’t have a good enough shot to be able to go up there and run with those guys. I just had to mire myself with as fast as I felt l could push the car and just ride and that was all I had. To answer your question, I do feel like the competition certainly stepped up over the years and has gotten stronger. I think the cars have gotten closer. It’s definitely harder to make your way through the traffic. You don’t see those dominant cars that maybe have an issue on pit road or a pit road speeding penalty or whatever that are able to drive up through the field with all the rules and everything just being so tight and the competition being so close. You really have to be on top of your ‘A’ game the whole time and don’t make any mistakes all day long.”

How will running tonight’s race help you with setups or notes for the Cup race?

“If there is any sort of setup things that we had on today’s car that is similar or consistent with some of the setup things that we will have for our Cup car tomorrow, we’re going to want to look at some of those things. I’m not sure about that, I doubt it because of ride-height rules and everything that’s all about Xfinity. I think the cars will be enough different that setup-wise, we probably didn’t learn a whole lot. But tires, we definitely were able to learn about and kind of figure out and get a feel for how hard you could push and what you can do throughout a run with that.”

How could long green flag runs impact the Cup race?

“I don’t even know what tire allotment we have or what the competition caution or anything that we have for tomorrow is. It would be interesting to see what those crew chiefs feel like and think if splitting a stage is actually faster than running one out or how that looks. Certainly, I would assume that those guys are trying to simulate that out knowing that it’s been pretty much some green flag runs here at Richmond for a long time. Not just this year and not just these last two nights, but at Richmond for a good bit.” 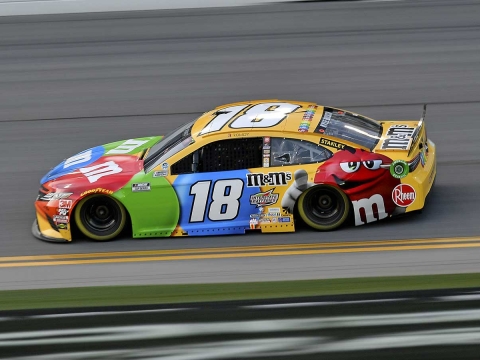