Looking To Heat Up in Texas

HUNTERSVILLE, North Carolina (July 17, 2020) – As NASCAR heads to Texas Motor Speedway in Fort Worth for this weekend’s tripleheader, Kyle Busch is looking at three chances to heat up in the Lone Star State.

In addition to being entered in Saturday’s NASCAR Xfinity Series and Gander RV & Outdoors Truck Series races, Kyle Busch will pilot the green lightning No. 18 Interstate Batteries Toyota for Joe Gibbs Racing (JGR) in Sunday’s Cup Series O’Reilly Auto Parts 500. With high temperatures forecast to be in the mid-90s this weekend, Busch knows he’ll need to excel in the heat to be able to bring home multiple victories Saturday and Sunday.

With Interstate Batteries returning to the No. 18 Toyota for what will be a hot Sunday afternoon in Texas, Busch is encouraging fans to stop by a local Interstate dealer to get their vehicle batteries checked as the dog days of summer are here. The summer months can be taxing on both man and machine, as hot weather has a far greater effect on batteries than the cold. One of the many ways JGR’s founding partner Interstate Batteries leverages its NASCAR program is by helping to remind consumers to have their batteries checked prior to summer road trips.

The 1.5-mile Texas oval happens to sit just 35 miles from Interstate Batteries’ Dallas-based headquarters and, in April 2013, Busch was the first driver to bring home a victory at Texas for the JGR partner that has been a staple in the sport for 28 years and founding partner of the organization owned by three-time Super Bowl winning coach Joe Gibbs. The win ended a streak of 19 Cup Series races in which Interstate had competed at Texas without a coveted victory. Busch followed it up with a win in the April 2016 Cup Series race at Texas, and with his third win coming in April 2018, he’ll now aim for his fourth Texas win during Sunday’s 500-mile race.

On top of his two Texas Cup Series wins, Busch is no stranger to victory lane there in other NASCAR series. He reeled off an incredible string of five consecutive Xfinity Series wins there from April 2008 to April 2010, then scored four more wins in April 2013, November 2014, April 2016, and April 2019. Add his four Truck Series wins in November 2009, 2010, 2014, and 2019 and Busch hits town this weekend with 16 NASCAR national series wins Texas and is poised for more as he is entered in the aforementioned three national series races during the weekend.

So in the heat of the summer in Texas, Busch and the Interstate Batteries team are looking to heat up with another win in the Lone Star State that could dramatically change their season the in backyard of a partner that has been along for the ride with JGR from the very beginning.

With high temperatures forecast for the weekend, what do you do to keep comfortable in the racecar in that type of heat?

“I have ice packs that I use with me and a helmet cooler that I use, and my strategy always seems to work out OK. Plus, I think it also boils down to what you put in your body and your workout regimen, the stuff you eat, the stuff you drink, all that sort of stuff. During the offseason, I work out really, really hard, and then when we go back to the regular season of racing, I tend to kind of back it down just a little bit. But when we had our two-month break there, I pushed on just like we were in the offseason and worked out really hard, and now I’m back to kind of backing back off a little bit and have been feeling fine.”

With no practice since the series returned in May and none in the near future, how do you take what you’ve learned so far to a place you haven’t run yet this year?

“With life not being normal and not having practice, we’ve been unloading at some of these places and not unloading great. I don’t know if we’ve unloaded perfect and haven’t had to make adjustments to our car one time this year. We’ve been wholesaling it, whether it’s been packer, air pressure, or wedge. There’s been some times where I’ve felt like we’ve had too much right-front camber and I wish we could change that, but we can’t. There are definitely some things that we’ve been picking up on that I would like to work on that we haven’t had the opportunity to do so. It’s on your mind that we don’t have that win and haven’t really been in contention to get that win a whole lot this year. It’s just a matter of a lot of circumstances that it’s been the way it has been for us so far. Hoping we can start the races close to where we need to be on Sunday and have a good run with our Interstate Batteries Toyota. It’s not normal times, but I know Norm (Miller, Interstate Batteries chairman) and everyone up the road at Interstate would be thrilled to see us win there.”

How special has the partnership between JGR and Interstate Batteries been for you?

“It’s crazy, if you think about it. If it weren’t for Norm (Miller, Interstate Batteries chairman), JGR wouldn’t even exist today. Personally, Norm and everyone at Interstate Batteries treats me and my family like we are a part of their family. We won the race at Daytona back in July 2008 and that was the first time Interstate Batteries had been to victory lane in a long time, and we’ve been able to add more for them over the years. Winning at Texas for the second time in 2016 was special, too. Any win is special. But, I’ll never forget how excited Norm was back in 2013 when we won the Cup race there even though 2016 was cool, too. Norm had been trying for so many years and he really soaked it up the entire night in 2013. He and Joe (Gibbs) came up to the Speedway Club and told some stories about how long they had been trying to win there. So I was very proud to be able to do that for Norm.”

What are your thoughts heading into the Texas race this weekend as far as what the track will be like?

“I know they’ve been working on the track, but you are still trying to put rubber down. With the smooth surface, it’s hard to understand what you’re feeling with your car because you can think you’re tight, you’ve got all the grip in the world, you’re going around the corner and then, ‘Boom,’ it just busts loose right out from under you with no warning. That’s why the older racetracks, the more aged racetracks – the Atlantas, the Californias – you’re sliding the whole time, so you’re already against the slide. You don’t have maximum grip. You’re already playing with it and trying to get the most out of yourself and the car that you possibly can. At Texas, you’re not just locked down, you’re locked in solid, then it can jump out from under you in a hurry. We were OK there last year but would like to have a good run there on Sunday with our Interstate Batteries Toyota.” 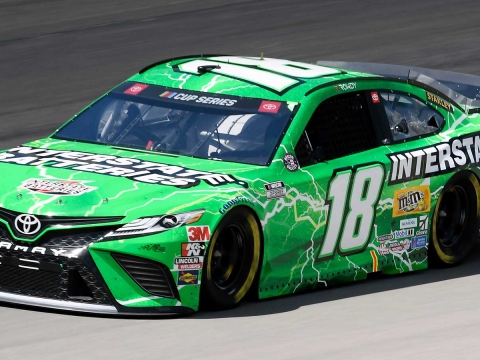 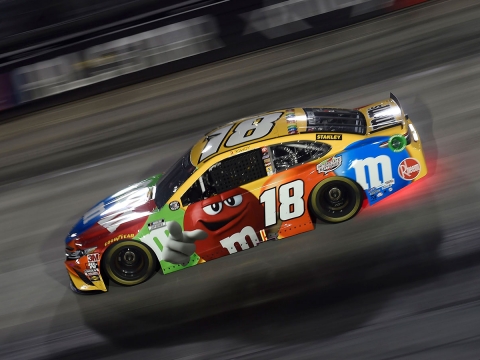