● Busch started third after posting the sixth-fastest time in Sunday’s Daytona 500 time trials. He ran among the top-five for the first 25 laps of the race.

● The Las Vegas native radioed to crew chief Adam Stevens that an adjustment was needed to help with the rear security of his M&M’S Toyota.

● Busch came down pit road for the first and only time of the 60-lap race on lap 33, where he took fuel and right-side tires.

● The 2019 Cup Series champion cycled back to second after the pit stop and sat second in a five-car breakaway as the laps wound down.

● When a late-race caution on lap 43 bunched the racecars back up, Busch was shuffled from the lead pack. While he tried to get pushes from David Ragan and Tyler Reddick, whatever he did it seemed he could not move back up through the pack.

● Busch crossed the finish line in 13th, with not much damage to his M&M’S Toyota as the team prepares for Sunday’s “Great American Race.”

“There’s not much we could do to get back up to the front there at the end. Our M&M’S Camry was better when we were in a smaller pack, since we had more control over where I could move around. At the end, we had guys trying to push, but it just didn’t seem like we could move up no matter who was behind us. We’ll work on our M&M’S Camry tomorrow in practice and get ready for Sunday.”

Erik Jones, driver of the No. 20 Toyota, finished sixth in Duel No. 2.

Martin Truex Jr., driver of the No. 19 Toyota, finished seventh in Duel No. 1. 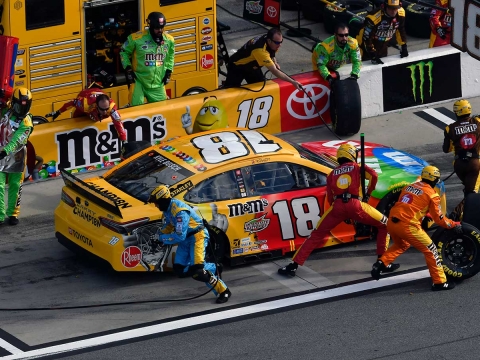