● Busch started the 35-lap exhibition race in 16th but moved up to seventh by the lap-eight caution.

● The two-time Cup Series champion pitted for the first time on lap nine and continued to advance through the field, moving all the way up to fourth by the lap-15 competition yellow.

● The M&M’S driver held within the top-five for much of the race, until a yellow waved with just six laps to go and Busch, sitting in fourth place, lost spots on old tires.

● The M&M’S driver went to work, moving quickly up into the top-five, and chased down the front two drivers, race leader Ryan Blaney and second-place Chase Elliott.

● Busch was still running in third place on the last lap when Blaney and Elliott made contact in the last corner. Busch slipped past both to win the second Busch Clash of his career, a perfect way to start off the 2021 season.

What did you think when you saw what happened on the last corner there?

“I knew to keep my head down and keep focus ahead and see if I could keep hitting my marks to get close enough to have a shot like that – if something like that were to materialize. Fortunately, it did for us. I can’t say enough about Ben Beshore (crew chief) and this whole M&M’S team – this new M&M’S team. I appreciate what they do for me, everybody at Joe Gibbs Racing, Toyota, TRD. It’s awesome to start off the year with a win, a non-points win, but I would love nothing more than to be right here this Sunday.”

How would you describe the last set of turns?

“I didn’t know how it was going to play out or what was going to happen there, but I saw those guys go in there two-wide and I was like, I don’t know if they’re going to come out two-wide. Certainly, it was a tough battle between those two. They were really good. The 9 (Chase Elliott) was fast. I don’t know if he was the class of the field, but the 12 (Ryan Blaney) was definitely just fast and made aggressive moves and was doing a good job all night getting himself back up to the front each time. Those two coulda, shoulda, woulda been the two to race it out for the win, and maybe the 19 (Martin Truex Jr.). Just interesting how that plays out sometimes and what dynamic will push you into victory lane. Here we are with our M&M’S Toyota. Thanks to TRD, Interstate Batteries and Rowdy Energy Drink and everybody that gets us here. Appreciate Ben Beshore and all my new 18 guys for this year.”

How important is it to get to victory lane and get a good start to the season with a new team?

“It’s nice to have good runs. Obviously, winning cures all. I’m not sure that we’re mature enough or we’re ready enough in order to win as a group, but I feel like this is a good start, anyways. Obviously, winning never hurts anything, but there is some stuff for us to get a little bit better on, for us to grow on. This is a good start. Doing the work that we did to prepare for this event and getting us in the right spot to be able to win tonight was what it’s all about. Good all around.” 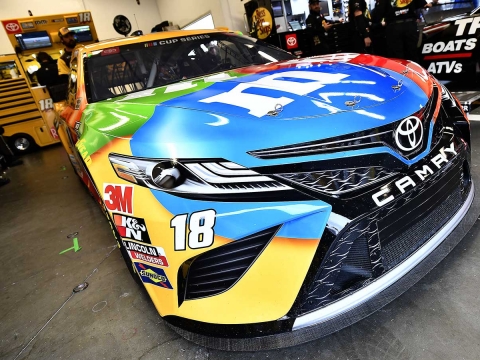