Race Recap for the Coca-Cola 600

● The M&M’S Red, White and Blue driver was on a mission during the opening laps, racing from 20th to the top-10 during the first 21 laps. He was in eighth place on lap 33 when he reported that “the car is really good.”

● Green-flag pit stops started taking place on lap 45, with the No. 18 team making a stop on lap 49 for four tires and fuel. Busch was scored in sixth place by the time stops had cycled through.

● Busch cracked the top-five on lap 85 but lost the spot a few laps later. He noted that the car had started to get a little tight as he continued to log laps.

● Busch finished the first stage in sixth place. The team changed four tires, added fuel and made a chassis adjustment during the break. Quick pit work placed Busch in fifth place to start the second stage.

● The two-time NASCAR Cup Series champion was in fifth place on lap 129 when he reported that the track was starting to get tight. He told his team a few laps later that he needed an adjustment to provide longevity for the right-front tire.

● Green-flag pit stops started taking place on lap 145. Busch gave up sixth place to make a pit stop for four tires, fuel and a chassis adjustment on lap 148. He was scored in fifth place once all teams had completed their respective stops.

● Caution waved for a single-car incident on lap 172. Busch once again reported that “the car is really good,” but that it would “stand up” whenever he got close enough to another car to pass.

● The majority of the field came to pit road for service during the stop, including the No. 18 team, which changed four tires and added fuel. A handful of teams either stayed out or took two tires during the stop, placing Busch in ninth place for the restart on lap 177.

● Busch quickly went to work picking off cars and was up to fourth place by lap 196. He maintained the position to the conclusion of the stage to finish fourth.

● Because the car was starting to get a little tight, the team made air pressure adjustments, changed four tires and added fuel. Busch lined up fourth to start the third stage.

● The Las Vegas native went to work to start the third stage, reporting updates on the car to crew chief Ben Beshore as the race continued.

● Green-flag pit stops started on lap 245 with Busch making a stop on lap 247 for four tires and fuel. He reassumed third place once green-flag stops cycled through.

● Caution was displayed on lap 295 for a single-car accident. With only a handful of laps left to the end of Stage 3, NASCAR closed pit road until the stage concluded.

● Prior to pit stops Busch reported that he needed a little more security in the car’s handling in the turn entries. The team changed four tires, added fuel and made chassis and air pressure adjustments.

● Once again, the pit crew’s quick work allowed Busch to pick up position. He lined up second to start the final stage.

● The M&M’S Red, White and Blue driver put up a valiant effort at the start of the final stage to try and hold off the charge of the four Hendrick Motorsports cars, which had dominated the event. He eventually settled in the fourth position and set about fending off the advances of the No. 48 car.

● Busch went to work and reeled in the car in front of him to take over third place on lap 335. A few laps later he reported that the balance on the car was good as he set about trying to catch the second-place car.

● Green-flag pit stops started taking place on lap 346 with the No. 18 team making what would be their final stop of the night on lap 347 for four tires and fuel.

● Busch returned to the track in second place but lost a couple of positions as cars came up to speed.

● As the laps wound down Busch was able to track down a couple cars ahead of him, eventually making a pass to take over third. He maintained the spot to the checkered flag.

● Busch’s third-place finish was his fifth top-five finish of the season in 15 starts.

“Overall tonight, we had a really good M&M’S Red, White and Blue Toyota Camry – strong from start to finish. We just kept trying to make some little tweaks to it there and make it a little better. I don’t know what happened on that final pit stop. We got out in front of a few of those guys who were up front all night, and they just had the momentum to get by me. I was just too loose on the front side to be able to stay in front of them. Once we got rolling we got a lot better and we were able to run them back down and run with them. It was a great night. Thanks to M&M’S, Toyota, TRD, Cessna, Rowdy Energy, Interstate Batteries – everybody that does a great job for us.”

Next Up: The next event on the NASCAR Cup Series schedule is the Toyota/Save Mart 350k on Sunday, June 6 at Sonoma (Calif.) Raceway. The race starts at 4 p.m. EDT with live coverage provided by FS1 and SiriusXM NASCAR Radio. 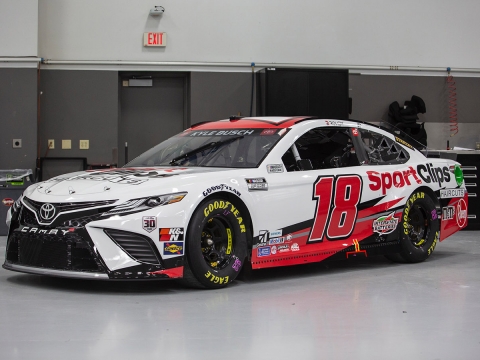 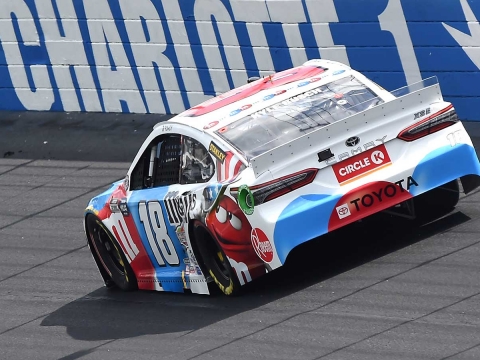