Note: Race extended three laps past its scheduled 188-lap distance due to a green-white-checkered finish.

● The Interstate Batteries driver started ninth and faded to as far back as 18th before he picked up his JGR teammates and they worked their way toward the front.

● Busch took the lead on lap 23 and held it through the competition yellow on lap 25. He came to pit road on lap 26 for tires, fuel and a trackbar adjustment, then restarted second behind JGR teammate Denny Hamlin on lap 29.

● The two-time Cup Series champion stayed up toward the front of the field as the stage wound down but got shuffled out of the draft. He managed to avoid a multicar accident on the last lap of the segment to finish Stage 1 in 12th.

● The Interstate Batteries driver came to pit road on lap 62 and took on four tires and an air pressure adjustment. The No. 18 team gained two spots on pit road to help Busch restart 10th for the start of Stage 2.

● Busch stayed up in the lead pack. He pitted on lap 91 for left-side tires and fuel, then cycled back into eighth place by lap 97.

● The Interstate Batteries driver was forced down below the yellow line by Matt DiBenedetto on lap 11, dropping him to 15th, but Busch recovered quickly and managed to move all the way back up to fourth to end Stage 2.

● Busch came to pit road on lap 122. After taking on four tires and fuel, he restarted the final stage in the fifth position.

● The Las Vegas native came to pit road for the final time on lap 155 while running in fourth, taking on two right-side tires and fuel for the run to the finish.

● The caution waved with four laps to go, and crew chief Ben Beshore called Busch down pit road from 13th to take on four tires and fuel. He restarted 24th with the overtime finish ahead.

● Busch and Beshore both thought there might be multiple attempts at a green-white-checkered finish, but there were no more, and Busch crossed the finish line in the 18th position.

“We had a good Interstate Batteries Camry. We got up front towards the end, but the Fords just had too many numbers, and we were mired in 13th, so took a chance on pitting and it didn’t work out. We’ll regroup and look forward to Kansas.”

The next event on the NASCAR Cup Series schedule is the Buschy McBusch Race 400 on Sunday, May 2, at Kansas Speedway in Kansas City. The race begins at 3 p.m. EDT with live coverage provided by FS1 and SiriusXM NASCAR Radio 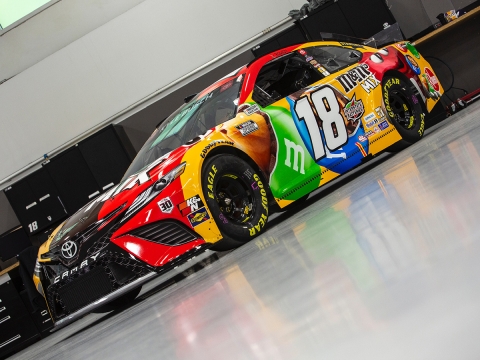