● The M&M’S Minis driver raced into the top-10 within the first eight laps. He reported that the car was handling on the tight side at the exit of every corner and that he needed help getting it to turn from the center of the turns to the exits.

● On lap 20, Busch cracked the top-five. He reported that overall the car was handling more tight than it had during Saturday’s race and that he specifically needed help getting the left front to turn better.

● Busch made a green-flag pit stop on lap 27 for a chassis adjustment, four tires and fuel. He returned to the track in 29th place and picked up a position by the time the first stage concluded.

● The team stayed out during the caution, placing Busch in fifth to start the second stage.

● Prior to the start of Stage 2, Busch reported that the shifter in the car kept popping out of fourth gear. He said he would need a plan to get the car to the end of the race.

● The Las Vegas native quickly went to work, picking up third place on the opening lap of Stage 2. He was second two laps later and took the lead on lap 47.

● As green-flag pit stops neared, Busch reported that the adjustment helped the car’s handling a little in the center of the turns but that he still needed help to be able to exit the turns better.

● Busch surrendered the top spot on lap 74 to make a green-flag pit stop for an air pressure adjustment, four tires and fuel. As he was coming to pit road he reported that the shifter was now stuck in fourth gear, which meant he would need a push from his crew members to get off of pit road. After completing service, the team went to work to push the M&M’S Minis Toyota the allowed three pit stalls. Busch was slow to come up to speed but did so and was scored in ninth place.

● During the break the team made a trip to pit road for four tires and fuel. Once service was complete a team member climbed into the car to try to fix the shifter. It was determined that the problem was most likely an internal issue, which meant Busch would have to complete the race only using fourth gear.

● Because the No. 18 M&M’S Minis Toyota was compromised with a transmission issue, the team elected to top off the car with fuel and attempt to finish the race without making further trips to pit road. Busch made a stop for fuel only, but the process was hampered by the transmission issue and the fact that the clutch had been used up trying to get the car up to speed.

● The two-time NASCAR Cup Series champion continued to log laps and to conserve fuel as best he could. He was scored in seventh place by lap 115 and was up to sixth at lap 120.

● As the laps continued to tick off, cars running in front of the No. 18 either ran out of fuel or were forced to make quick trips to pit road for a splash of fuel.

● With three laps to go, only teammate Denny Hamlin was in front of Busch. When Hamlin made a trip to pit road for fuel as the field came around to take the white flag, Busch took over the top spot and maintained it to the end to score the win.

● Busch’s win in the Explore the Pocono Mountains 350 was his 59th career NASCAR Cup Series victory, his second of the season and his fourth at Pocono. His margin over second-place Kyle Larson was 8.654 seconds.

● Busch led two times for a total of 30 laps en route to the victory.

“Sometimes you have to have a little bit of luck on your side, and today, we had some luck on our side. It felt good. I think the biggest thing this week – everything was second, and if that was all we had for today, we will take it. It’s pretty cool to win up here at Pocono. It’s such a tough racetrack, and all of the guys and everyone with this package, it’s so hard to pass sometimes. We had to fuel save that whole last run to be able to get everything we could out of that gas tank. No clutch, no leaving pit road, extended time on pit road – to come back and be at full song by the time the field went green, that was an ordeal. I don’t know. Thanks to M&M’S Minis, Rowdy Energy drink, Interstate Batteries, Toyota, Stanley, Sport Clips, the fans of course – Rowdy Nation – all of those guys up there. My family, (son) Brexton, (wife) Samantha – they are here too, so I will celebrate with them.”

The next event on the NASCAR Cup Series schedule is the Jockey Made in America 250 on Sunday, July 4, at Road America in Elkhart Lake, Wisconsin. The race starts at 2:30 p.m. EDT with live coverage provided by NBC and SiriusXM NASCAR Radio. 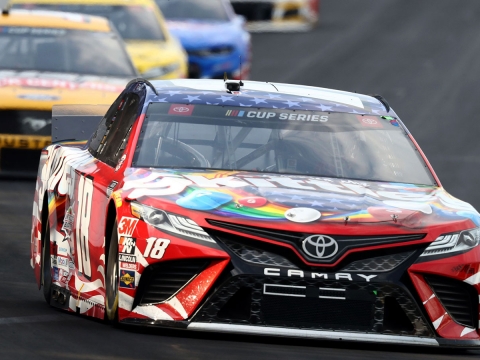 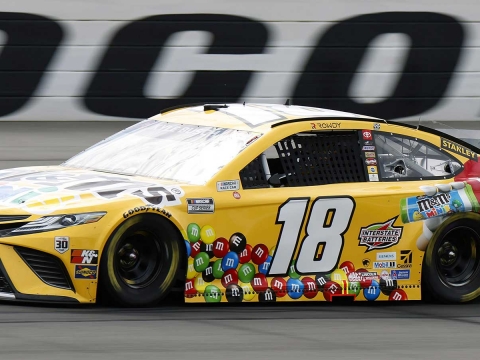