HUNTERSVILLE, North Carolina (Oct. 8, 2019) – While Kyle Busch doesn’t have a ton of experience in the world of dirt racing, he’ll be borrowing an often-used dirt-racing term as he’ll look to “ride the cushion” this weekend at the mammoth 2.66-mile Talladega (Ala.) Superspeedway in hopes of getting one step closer to advancing to the Round of 8 of this year’s Monster Energy NASCAR Cup Series playoffs.

Last weekend’s Round of 12 opener at Dover (Del.) International Speedway saw Busch battle back from an early race pit-road speeding penalty on the Monster Mile and run as far back at 18th before making a strong recovery late in the race and bringing home a solid sixth-place finish. The No. 18 M&M’s Hazelnut Spread Toyota Camry for Joe Gibbs Racing (JGR) team is accustomed to running much better, but every point counts in the current playoff format and the top-10 finish enabled Busch to expand his cushion over the ninth-place cutoff spot to 48 points in the playoff standings with two races remaining in the Round of 12.

While it’s nice to have the abundance of playoff points he earned during the regular season, Busch isn’t at all fooled by the word cushion, which isn’t comforting to hear at a place like Talladega. So far, only Kyle Larson, by virtue of his win at Dover last weekend, is guaranteed a spot in the Round of 8. Despite not winning at Dover, Busch’s success during the regular season, as well as in the Round of 16, earned him a total of 45 playoff points that will certainly help his cause going into the wild-card race at Talladega.

Busch has found fortune both good and bad at Talladega. With lessons learned during his 15 seasons on the tour, the 2015 Cup Series champion knows anything can happen at Talladega, where one lap, or even one corner, could change a driver’s fortunes quickly.

He has conquered Talladega just once in his career, his lone win coming in April 2008. In his 26 starts at the track, he has 13 top-15 finishes, and four outings that ended in an accident. So, the Las Vegas native knows the winner of Sunday’s 500-mile race will need to have a strong car and some good fortune at the longest track on the schedule

As he and his NASCAR counterparts head once again to Talladega, Busch will wish for more some good fortune to complement his playoff points cushion in the second race of the Round of 12. He’ll work to stay in front of the chaos with his M&M’S Hazelnut Spread Camry, then head to Kansas the following week with, at the very least, a strong shot of advancing in the tightly contested NASCAR playoffs.

How will you and the team approach this weekend at Talladega?

“I think you approach it the same way no matter where you are in the points. I’ve been in front and been a part of a wreck and I’ve been riding in the back and been taken out, too. There’s really no place that’s safe. With this race being the second race of the round, you have to try and run up front and hope that you don’t have some bad luck and just bring home a solid finish. We’ll do the best we can this weekend with our M&M’S Hazelnut Spread Camry and see where the points fall for us afterward, then focus on what we need to do at Kansas.”

Strategy‑wise, which is your best remaining track?

“I don’t really look at one, necessarily. I kind of look at all of them. I look at all of them as being really good tracks for us that we can contend at. If I look at the most worrisome track for me, it’s Talladega this weekend. The rest of them, I feel like we’re pretty good. They are all places we are capable of running well at, even though we’ve seen Martinsville have some crazy finishes recently, but it’s a place I like and run well at. If we can have a decent finish this weekend, I feel like Kansas next weekend has been really good for us, recently.”

Is a win at a premium in the playoffs?

“I think wins are always important and I think the biggest thing now is that each round kind of has its own wild-card race, if you look at it. You’ve got the Charlotte roval in the first round, Talladega this weekend in the second round, and then Martinsville kind of turned into a crazy race in the third round. It’s all just going to be about trying to maintain and have a good day. If you can get top-five finishes, great, that’s going to propel us through with the amount of points we have and the point cushion we have, but wins are the ultimate. If you can get those, then you’re automatically in and that’s what we all strive for.”

Do you try and duplicate what worked at Talladega before?

“Yeah, I think so. I mean, there are obviously times when you feel like you want to push hard and go get a win or go get a better finish than where you’re currently running. But, you know you’ve just got to do what you can in order to let these races kind of fall into place, and sometimes it’s just worth taking the finish that’s coming to you and moving on and going to the next one. It doesn’t always help to push too hard, either, at times. There’s a balance there, for sure. It can also help to just sit back, relax and finish where you can, so we’ll see how it plays out for us. In the spring race there, we had a strong car and ran up front, but just didn’t have enough Toyotas running up front at the end to get any help. That’s what it comes down to a lot at Talladega, getting the help from your teammates since it’s hard to do that on your own.”

“The key there is to somehow stay out of trouble. At Talladega, you pretty much stay around the bottom since there is a lot of grip there, and you can pretty much run wide open every single lap. Everyone can run up on top of each other. When you get single-file at the bottom, sometimes it’s hard to get a lane on the outside with enough good cars to get something going. It can be frustrating at times because of that. It also seems to still put on a good race each time we go there. If you can be a contender and stay in line on the bottom, you can make it a pretty easy and safe race. Normally, guys are not content doing that, so that’s when it starts to get crazy.” 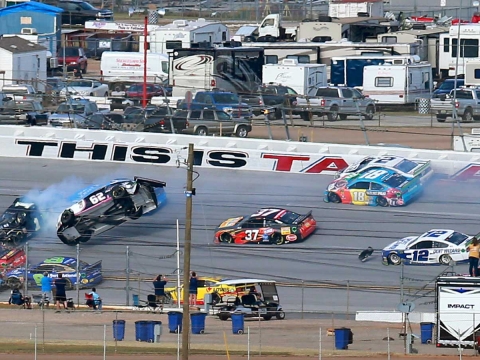 Race Recap for the Drydene 400 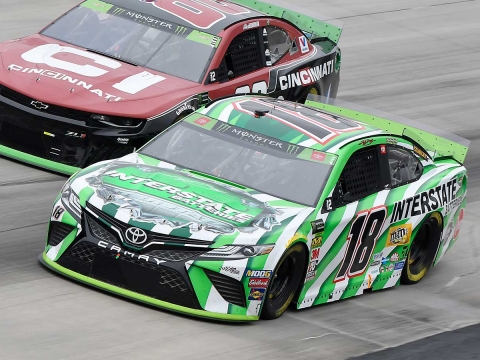