HUNTERSVILLE, North Carolina (June 12, 2020) – For the first time since 2001, Homestead-Miami Speedway won’t be the host for the final race of the NASCAR Cup Series season. For the last six seasons in particular at the 1.5-mile South Florida oval, competitors in NASCAR’s top three series had grown accustomed to seeing the final four drivers left in each series’ playoffs wage a winner-take-all battle for the season-ending championship, making for many dramatic moments.

With the finale moved to Phoenix Raceway this year, Homestead was poised for a late-March event. But the COVID-19 pandemic forced the Homestead 400 to be moved yet again – to this Sunday.

Kyle Busch, driver of the No. 18 M&M’S Fudge Brownie Toyota Camry for Joe Gibbs Racing (JGR), was a huge part of many of those Cup Series championship battles at Homestead as he was one of the final four playoff drivers each of the past five seasons to compete for the championship. Busch brought home titles in 2015 and 2019 at Homestead, along with a runner-up position in 2017. His worst finish in his five-year Championship 4 run was a sixth-place run in the 2016 race.

Sunday’s 400-mile Homestead race will be different than Busch can ever remember. The mindset has changed from doing whatever he and his team can to be the first of four championship-contending cars to take the checkered flag and win the prestigious title, to just adding another race win in order to be eligible for the title when the 10-race, 16-driver playoffs start in early September.

With two wins and four top-five finishes there over the last five seasons, Busch has become a strong contender at the variable-banked oval. But the M&M’S Fudge Brownie driver hasn’t always been as strong on his visits to Homestead, as his first seven starts there would indicate. But starting in 2012 with his fourth-place run there, he has reeled off five top-five finishes and seven top-10s in his last eight starts at Homestead. His most impressive races at Homestead, of course, were his 2015 and 2019 championship-winning victories. The memory of celebrating multiple titles there will always provide fond memories for the Las Vegas native.

So, as Busch heads to South Florida on Sunday afternoon, the M&M’S Fudge Brownie driver won’t have the championship pressure to contend with, but that doesn’t mean he won’t aim to bring home his third Cup Series win at a place that has provided many great memories.

From your recent experience, how has Homestead changed over the last several years?

“The track seems to have aged a little more in recent years for sure. Definitely a lot of grip for the first few laps, and then it really tapers off, and then everybody is running up next to the fence. I think that’s what we saw in years past. As it got darker in the November races, the track seemed to widen out. It’s just during the day, when it’s hot out and it’s slick out, that the best you can do is run right next to the wall, so expecting some of that this weekend with it being a different time of year. It’s definitely still a racey joint, but track temperatures are very conducive to that. It will definitely be different racing there and not having it be for a championship, but it would still be nice to get our M&M’S Fudge Brownie Camry to victory lane there.”

It seemed like there was improved performance on the intermediate track at Atlanta by the Toyotas. Does that mean you’re feeling better now about your program heading into the next 1.5-miler at Homestead?

“I wouldn’t say entirely. Atlanta is kind of its own beast. Well, Atlanta and Homestead are pretty significantly high-downforce tracks, and we tend to run well there. (Martin) Truex (Jr.) definitely tends to run well there. He did last year, and I think Denny (Hamlin) has won there a couple times, so it’s a place where we should have good results, and it’s nice to come out of there with a good, solid run, run up front all day long and have a good outing. We have to put what happened to us at Martinsville behind us and hopefully we can keep that momentum rolling from where we were at in Atlanta last weekend.”

Has Homestead always been a fun track for you?

“Homestead is a fun racetrack, for sure. I didn’t run well there early in my career, but definitely since Adam (Stevens, crew chief) has come on board, we’ve really been able to step up our performance there and we have some big wins there to show for it. It’s real challenging because of the way the race changes from the beginning to the end, and the way things change from the beginning to the end of your runs. You run the bottom, then you go to the top. You’re always moving around. You’re always thinking. It’s a cool racetrack and it will be a challenge going there in June with it being hot and slick as opposed to November, when it’s cooler, but also the race ends more at night than this one is going to.”

A lot of these races are at tracks that have races in the spring or fall with cooler weather. With how hot these races have been, what do you do to stay in shape during hot races like at Atlanta, Martinsville and Homestead?

“I have ice packs that I use with me and a helmet cooler that I use, and my strategy always seems to work out OK. Plus, I think it also boils down to what you put in your body and your workout regimen, the stuff you eat, the stuff you drink, all that sort of stuff. During the offseason, I work out really, really hard, and then when we go back to the regular season of racing, I tend to kind of back it down just a little bit. But when we had our two-month break there, I pushed on just like we were in the offseason and worked out real hard, and now I’m back to kind of backing back off a little bit and have been feeling fine.” 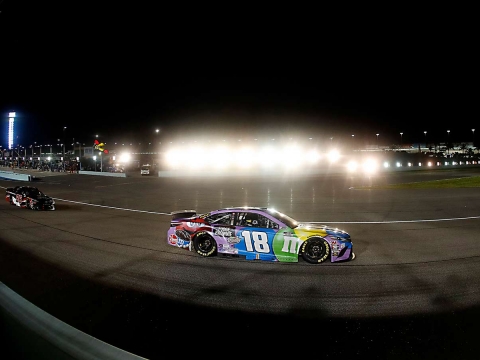 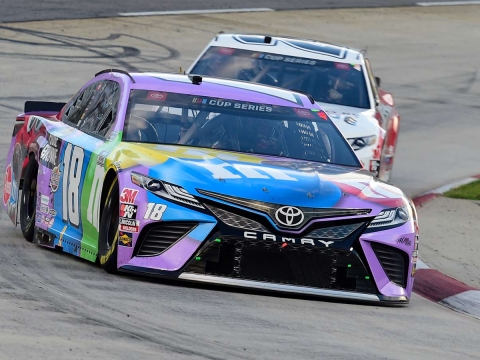