HUNTERSVILLE, North Carolina (March 16, 2021) – As the NASCAR Cup Series heads to the sixth race of the season at Atlanta Motor Speedway, Kyle Busch is hoping to “send a message” in more ways than one.

Busch, driver of the No. 18 M&M’S Messages Toyota Camry for Joe Gibbs Racing (JGR), will have M&M’S Messages on board for Sunday’s Folds of Honor QuikTrip 500 at Atlanta. First launched in 2020, each M&M’S Messages pack features a unique expression delivered by the iconic M&M’S spokescandies to help people connect and find humor in everyday life.

This year, Kyle Busch’s No.18 M&M’S Messages Toyota features two very appropriate phrases. “Thanks for Being as Awesome as I Am” will debut at Atlanta this weekend while another appropriate phrase, “I’m Not Competitive, I Just Hate Losing,” will adorn the car next weekend at the Bristol (Tenn.) Motor Speedway dirt race.

M&M’S Messages packs are featured in the beloved fan-favorite flavors – Milk Chocolate, Peanut, Peanut Butter and Caramel. Fans can find M&M’S Messages on shelves at retailers nationwide for a limited time, or they can order their favorite M&M’S Messages packaging design by visiting mms.com.

There’s another way Busch is hoping to send a message this weekend, and that would be by bringing home his third win at the 1.5-mile oval. His first win there might have been his most memorable. It was just his fourth start for JGR, Mars Wrigley, and Toyota, and Busch brought home the victory, which was the first of many for the driver-sponsor combo. Since then, Busch has amassed 53 total wins and two Cup Series championships, including another victory at Atlanta in 2013. A win Sunday in the M&M’S Messages Toyota would certainly send a message that the No. 18 team will be a championship contender yet again.

To further support the M&M’S Messages scheme, fans can tweet their favorite expression from one of 28 different M&M’S Messages packs available using the hashtag #MMSSweepstakes. The promotion, which opened this week and will close Sunday, March 28 at 9 a.m. EDT, aims to bring better moments and more smiles to the faces of M&M’S Racing and Kyle Busch fans across the country. As part of the promotion, select fans will be randomly chosen to win signed M&M’S Racing hats and diecasts, in addition to the grand prize – a signed piece of Busch’s No.18 M&M’S Toyota Camry.

So, as the Cup Series heads back to Atlanta this weekend, Busch and the M&M’S Messages team look to take lessons from their 2008 and 2013 race wins on the lightning-fast oval and bring home his third Cup Series win at the track and 58th of his career. Busch would like nothing more than to send a winning message and bring home his first win of the 2021 season.

What are your expectations going to Atlanta?

“Atlanta is one of those places where anything can happen and we’ll definitely have to be on our toes there this weekend with our M&M’S Messages Camry. You have to have good grip there, you have to have good (tire) fall-off – you have to be fast to start a run, yet you don’t want to fall off more than anybody else. So you have to take care of your stuff and bide your time a little bit. That lends itself to options by the driver to either push hard early (in the run) or save a little and be there late.”

With the way the racing is on the 1.5-mile and 2-mile ovals, are you doing anything differently with the aero on those types of tracks?

“It’s the same for everybody. You’re trying to shut off the guy behind you. You’re trying to shut his air off. That’s why the blocking is so bad, even at some of these places. The guys out front, they’ll mirror drive wherever the heck you’re going to make sure they shut your air off so you have to get out of the gas and stay out of the gas and lose momentum, and they can get a gap on you so they don’t have to deal with you again. As soon as you sort of lose that lead draft, if you’re not fast enough to catch back up to that guy in front of you, then you just continually seem to lose ground.”

How has the challenge of getting to know and working with a new crew chief going in terms of communication?

“I think it’s been good. It’s going to take a little bit of time. I would think that as we probably go a few more races, we would just have to look at our setup, how we start, how we end some of these races, then what tracks we’re going to that mimic this. We go to Kansas, for example – I would take this setup right there, look at the two Vegas and Kansas setups from last year, look at this Vegas setup, and see how we want to build our Kansas setup. Maybe we can take some things from Homestead, where we can apply them to Atlanta. Try to come up with a way of being able to do it, forget about the simulator. That’s where it gets complicated and challenging. We’re trying to utilize and make that tool better so we can really go out there and look like heroes.”

What are your memories of racing at Atlanta?

“I’ve won a few Truck Series races there. That was fun. I won for the first time in an Xfinity race there a few years ago, so that was very cool. I finished second three or four times, so it had been an Achilles heel for me, I guess. The Cup races there, I’ve either been really good or really bad, it seems. There have been times where I’ve been really good throughout the event. I don’t know what it is, but I just can’t seem to keep the grip in my car for the long haul, as long as you need to throughout a run.”

● Feels Like the First Time: Back in 2008, his first year with JGR, Busch headed to Atlanta for the fourth NASCAR Cup Series race of the season aiming to bring home his first win for the team’s two new partners – Mars Wrigley and Toyota. After leading a race-high 173 laps, the Las Vegas native captured his first win for Mars Wrigley/SNICKERS®, as well as the first win in NASCAR’s top series for Toyota, which was in its second year of Cup Series competition and its first year with JGR.

● Making History at Atlanta: Busch’s history-making 2008 win at Atlanta also marked the end of a 147-race drought for JGR’s No. 18 team, and it was Busch’s first of 53 Cup Series wins for JGR, so far. Busch has now totaled 192 overall wins among NASCAR’s top three series driving Toyota vehicles – 53 in the Cup Series, 86 in the NASCAR Xfinity Series, and 53 in the NASCAR Camping World Truck Series. Add 21 overall wins prior to joining JGR at the beginning of 2008 and Busch is at 213 combined Cup, Xfinity and Truck Series wins, and counting.

● Atlanta, Take Two: Last season, the Cup Series was scheduled to head to Atlanta for what was supposed to be the fifth race of the season. However, the COVID-19 pandemic moved the race to later in the year as the 2020 Folds of Honor Quiktrip 500 was finally contested in June, when Busch came home with a runner-up finish behind Kevin Harvick. For the first time since 2010, Atlanta will play host to two Cup Series races in 2021 as the series will head back to the 1.5-mile oval on July 11.

● Close Calls: While Busch last won a Cup Series race at Atlanta in 2013, the two-time Cup Series champion has only finished outside the top-10 three times in his past 10 starts there. Along with his runner-up finish at Atlanta in 2020, Busch has scored three straight top-10s there.

● Triple Duty: In addition to Sunday’s Cup Series race, Busch will be busy behind the wheel this weekend in Georgia and Tennessee. In preparation for NASCAR’s first Cup Series race on dirt in more than 50 years, Busch will also participate in the dirt Super Late Model ranks this weekend on the dirt surface at Bristol (Tenn.) Motor Speedway this weekend for Double L Motorsports, with races on Friday and Saturday nights at the half-mile short track. In between, Busch will pilot his No. 51 Toyota Tundra in Saturday afternoon’s Camping World Truck Series race for his own Kyle Busch Motorsports (KBM) team at Atlanta. Once the Truck Series race is complete, Busch will take the short flight from Atlanta to Northeast Tennessee for the feature event Saturday evening. Busch has five wins in 12 Camping World Truck Series starts at Atlanta with his most recent win there coming in 2019. 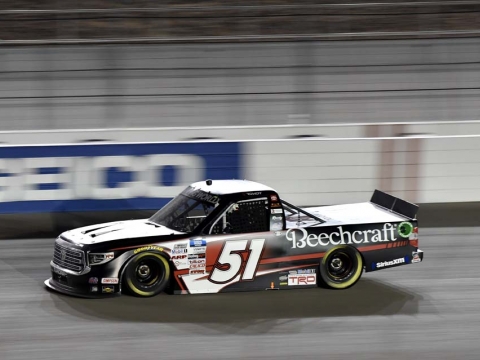 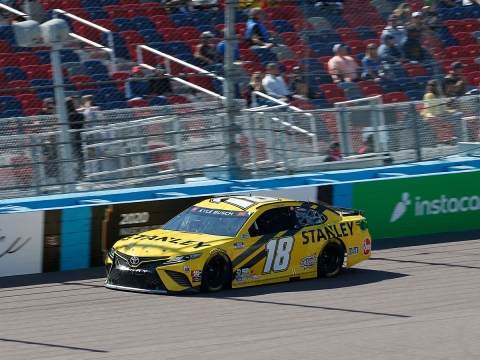