HUNTERSVILLE, North Carolina (May 5, 2021) – M&M’S were first introduced in 1941 by Forrest Mars, Sr., who got the idea for the candy after observing soldiers eating chocolate pellets with a hard shell during the Spanish Civil War. The candy was made with a hard shell so the soldiers could carry it during warm weather, the hard shell making it more difficult for the chocolate to melt.

Some 80 years later, the M&M’S brand has stood the test of time, and the popular candy has branched out in recent years with many successful flavors such as M&M’S Caramel, M&M’S Fudge Brownie, and countless other favorites. Most recently. M&M’S introduced M&M’S MIX, which combines three different flavors of M&M’S in one bag as the brand celebrates its eight decades of existence in 2021.

When it comes to active NASCAR Cup Series drivers, Kyle Busch has also stood the test of time. In fact, with his win this past Sunday at Kansas Speedway in Kansas City with the M&M’S MIX colors riding along on his No. 18 Toyota for Joe Gibbs Racing (JGR), the two-time Cup Series champion extended an impressive streak of 17 straight seasons scoring at least one victory in NASCAR’s top series. Even more impressive is that Busch’s streak tied NASCAR Hall of Famer David Pearson at second on the all-time consecutive years with a win list, and puts him just one behind the all-time record of 18 consecutive years with a win set by another Hall of Famer, Richard Petty. Busch will have a chance to tie Petty’s record with a win in 2022.

Before he thinks about being able to sit alongside “The King” in the record books, the Las Vegas native has plenty of work to do this season. His attention will now turn to Darlington (S.C.) Raceway for Sunday’s Cup Series Goodyear 400. He’ll look to make it back-to-back wins in his No. 18 M&M’S 80th Anniversary paint scheme during the historic South Carolina track’s annual NASCAR Throwback Weekend.

Busch, who now has 58 career wins in NASCAR’s top series, has won consecutive races six times in his 17 fulltime seasons. The M&M’S driver won back-to-back in 2008 at Daytona and Chicagoland, in 2015 at Kentucky and New Hampshire, in 2016 at Martinsville and Texas, in 2017 at New Hampshire and Dover, in 2018 at Texas, Bristol and Richmond, and in 2019 at Phoenix and Auto Club Speedway.

As Busch and the M&M’S 80th Anniversary team head back Darlington, they return to a place where they’ve won before and Busch has enjoyed recent success. The Las Vegas native has conquered “The Track Too Tough To Tame” with a Cup Series win in May 2008. It earned him the distinction of being the youngest Cup Series winner – at 23 years of age – in the track’s storied history. Busch also has two Xfinity Series wins at Darlington, coming in May 2011 and 2013.

Last year, the Cup Series competed three times at Darlington after the COVID-19 pandemic spurred a revamped 2020 schedule, and Busch brought home best runs of second place in the Wednesday-night race in May, and a seventh-place run in Labor Day Weekend’s Southern 500.

So as Busch heads back to the track known as the “Lady in Black” this weekend, he’ll look to add another Darlington win to his resume his seventh set of back-to-back wins during a career that has no doubt stood the test of time.

What do you think you need to do at Darlington in order to bring home back-to-back wins this weekend?

“It’s the 750-horsepower package, so we have run the low downforce at Darlington, which we haven’t done in a while. I think it was 2018 the last time, and back then I think we had the movable track bars, so it’s definitely going to be a different race. I feel like running the Xfinity race there last year was the best test for me to know and experience what it’s going to be like this time around in the Cup cars. I tell you what, those cars are a handful. You take the downforce off them and put them on a worn, slick racing surface and you are going to be slipping and sliding all over the place. You’ll be wanting tires after about seven laps, and you darn well will have to go 40 or 45 laps before you can actually get tires. We’ll see what happens, but we are really looking forward to our M&M’S throwback paint scheme. It’s the throwback celebrating 80 years of the M&M’S brand. Looking forward to carrying those colors and trying to get back to victory lane in back-to-back weeks.”

Would you say this is an important stretch for the series as you are in the midst of a lot of tracks that are also playoff venues?

“It’s an important stretch for us. We have to run well and we certainly did that at Kansas last weekend. You’ve had Richmond, Martinsville, Talladega, Kansas, and Darlington this weekend, all in the playoffs, so you want to run well and set yourself up to run well at these places in the fall. You don’t have practice, so you are showing up to these races how you think you need to show up. The biggest thing you would learn at these places is how the races go and picking those things out in the racecar that you work on for the next time you come back to make sure you are even better. Next time you come back, you won’t have practice, either, so you want to make sure you are ready when the race starts.”

Now that you have a win, does that make you more aggressive trying to earn stage and playoff points?

“Now that we have a win I would certainly put my neck out on the line a bit more and do whatever we’ve got to do to try and get another win and more playoff points. Because you have a win, it gives you a little bit – not a lot – of cushion. There are still 10 of us who have one win that also have the five bonus points – we only have that one extra stage win that gives us that sixth bonus point. You’re not super far ahead and we need to work our way up in points when the regular season comes to an end, and you are rewarded with those points as far as where you start the playoffs at. That’s next on the docket. You still have to be consistent and try not to crash out and get as many points as possible, but it gives us a bit more leeway than we had going into Kansas.”

Darlington was repaved prior to 2008 and it’s back to a surface that’s worn and chews up tires. How much does the surface there change from year to year?

“Darlington gets worn out a lot more every year we race there. We’ve gone back there the last couple of years and it’s really slickened up and fallen off. The pace falls off a ton over the course of the run and really chews up the tires for the first little bit of the race. As the rubber gets down on the track, it starts to level off a little bit, but still the day races there are treacherous and slick and hard to hang on. Especially coming back this year, we’ll have the lower-downforce, higher-horsepower package, which will be a lot more to have to hold onto.”

At Darlington, do you wait to get toward the front as it gets later in the race when the sun is starts going down? How does the track change as it goes from afternoon to early evening there?

“You start the race off there and you just don’t want to hit the wall. We know how easy it is get into the wall and get a Darlington ‘stripe.’ You don’t want to hit the wall and take yourself out of a chance to win the race. The early stages of the race, you are biding your time and racing the racetrack and you are trying not to put yourself in a bad spot, and you aren’t worrying about competition, and you aren’t trying to take too many chances. As it gets deeper into the race and closer to the checkered flag, you are definitely going to be going for it and, if you can find even a half-inch of grip by getting a half-inch closer to the wall because that’s where the speed is at, you’ve just got to do it.”

● 17 and Counting: With his win at Kansas, the 58th of his Cup Series career, Busch extended an impressive streak of winning at least one Cup Series race in 17 consecutive season, tying NASCAR Hall of Famer David Pearson for second all-time. Another NASCAR Hall of Famer –Richard Petty – holds the record of 18 consecutive seasons with at least one victory in NASCAR’s top series, a record Busch will attempt to match with at least one victory in 2022.

● All in the Stats: Busch has one win, five top-five finishes and 12 top-10s and has led a total of 716 laps in 18 career Cup Series starts at Darlington. Busch’s average Darlington finish is 11.2.

● 2-for-2: Busch celebrated his 36th birthday with a win at Kansas Speedway in Kansas City last Sunday. It was the second time Busch has won on his birthday, having won at Richmond International Raceway in 2009. He joins NASCAR Hall of Famer Cale Yarborough as only the second Cup Series driver to win multiple times on his birthday.

● 215 and Climbing: Busch will be aiming to add to his record 215 overall wins among NASCAR’s top series this weekend at Darlington. Busch has 58 Cup Series wins, 97 wins in the Xfinity Series, and 61 wins in the Camping World Truck Series after sweeping the weekend at Kansas last weekend. 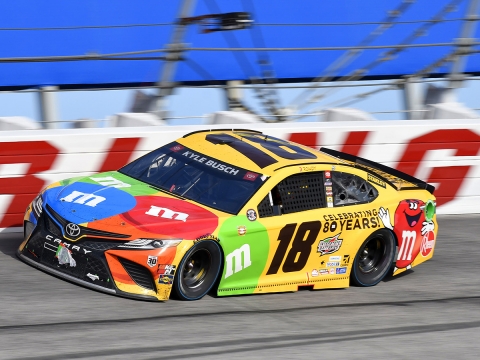 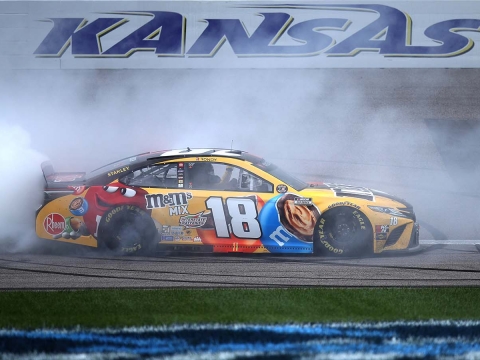