HUNTERSVILLE, North Carolina (Sept. 2, 2020) –While Mars Wrigley Confectionery’s involvement with NASCAR team sponsorship started all the way back in 1990, the beginnings of the M&M’S brand scheme fans see today with the core yellow M&M’S scheme started back in 2004, when the M&M’S lentils first fully adorned the No. 38 Robert Yates Racing machine.

As Kyle Busch heads back to Darlington (S.C.) Raceway for the annual “Throwback Weekend”, M&M'S will go back to the base of the scheme he’s taken to victory lane so many times during his 13-plus seasons driving the No. 18 M&M’S Toyota for Joe Gibbs Racing.

In this most unusual year, Sunday’s Cook Out Southern 500 will be the third NASCAR Cup Series race of 2020 at Darlington, where the series made its return from the 10-week layoff during the onset of the COVID-19 pandemic and conducted its first two races back on May 17 and 20. Making this year’s Labor Day-weekend race at Darlington even more intriguing is that it’s the first time the historic, egg-shaped oval has kicked off the 16-driver, 10-race Cup Series playoffs.

Busch has conquered Darlington before, having brought home the Cup Series win at “The Track Too Tough To Tame” in May 2008. It earned him the distinction of being the youngest Cup Series winner – at 23 years of age – in the track’s storied history. Busch also has two NASCAR Xfinity Series wins at Darlington, coming in May 2011 and 2013.

From 1950 through 2003, the traditional Southern 500 at Darlington was held every Labor Day weekend. In 2004, the race was moved to the penultimate race of the season during the first year of NASCAR’s playoffs before it was moved to the Saturday of Mother’s Day weekend from 2005 through 2014. In 2015, the race returned to its rightful and traditional spot on the calendar, and Sunday night’s race will mark the 60th time NASCAR’s top series will race in Darlington on Labor Day weekend, albeit it's first turn at kicking off the 10-race Cup Series playoffs.

So, as Busch returns to “The Lady in Black” for Sunday night’s 500-mile marathon, he and the M&M’S team look to bring home their second win in what many consider to be one of NASCAR’s crown jewel races. They’ll also take a trip down memory lane with a throwback scheme that takes them back to the original core yellow M&M’S scheme fans are very familiar with today.

What are your mindset and expectations as you head into the playoffs?

“I have no expectations. Just take every event as it comes to us, every opportunity that comes to us, try to do what we can do. We’re going to start every single one of these playoff scenarios behind the eight-ball, basically on the outside looking in. We’re going to have to do everything right. In a perfect world, you win races in each of those rounds to push you all the way through to the final round, and you’re good at Phoenix. That’s kind of the name of the game. If we can Tony Stewart it, hopefully that will be what we can do. Just need to kick it off right this weekend. We raced well at Darlington back in May, just didn’t get the finish in the first race we deserved. Looking forward to getting our M&M’S Throwback scheme up front and see if we can’t get a win this weekend.”

“It’s a very narrow and challenging racetrack, especially for the speeds that we carry around there, now. We’re looking forward to the challenge with our M&M’S Throwback Camry this weekend. You’ve really got to be able to get as close as you can to the wall in order to carry your momentum through the corners because you’ve got to make the straightaways as long as you can. The track is very narrow on entries and exits, so you’re always trying to round the place as much as you can. It’s very one-groovish. You can’t really run side-by-side there. Any time you get alongside somebody, you basically have to let them go. It’s a very big give-and-take type of track. It’s a lot harder to pass now, with the fresh asphalt, than it used to be. It’s really aero-sensitive now, to where it used to be more about mechanical grip and getting your car to handle well and handle over the bumps well and keep the tires on it. Now you’re restricted off the car in front of you and are trying to find some air, basically.”

How do you assess your 2020 season heading into the playoffs?

“It’s been a lot like a lot of people’s 2020. The roller coaster of finishes, and we’ve had good races and bad races. Thinking you’re going to have a good run and someone runs into you and you get a flat tire, or a long list of other unfortunate things have happened. We certainly want to get a win here soon. I also look at 2011, I think, when Tony Stewart didn’t do anything in the regular season and came out in the final 10 weeks and won five of those 10 races and won the championship. Also in 2016, Jimmie Johnson wasn’t a huge factor in a lot of the season but made it to the final four and certain circumstances put him in a position to be able to win the championship. So anything is possible. It’s all right there, but we just got to be able to execute when it matters.”

Can you describe the “Darlington Stripe” and what it’s like to get one?

“A Darlington Stripe is pretty easy to receive. Running at Darlington is so tough and we are carrying so much speed there nowadays that you have to run right up there against the wall in order to get your car pointed correctly for the next corner, the next apex you have to make. So, running next to the wall in (turn) one and (turn) two and turning down coming off of two and carrying big momentum and big speed down the backstretch in order to set yourself up for turn three is important. Running high in three and four all the way through the corner, trying to keep the momentum going, because it’s such a tighter corner that the radius difference between each end of the track, you try to spread that radius as wide as you can and that’s right up against the wall. So, at any moment that car can slip and, during a run when the tires fall off, you have to be aware of one to two seconds of tire fall-off and your car is slowing down and at any moment you might slip a little bit and tag that wall. It can be very easy to do.” 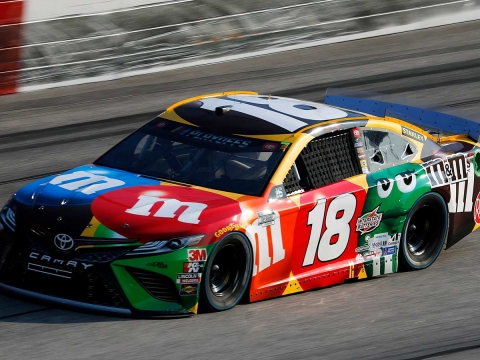 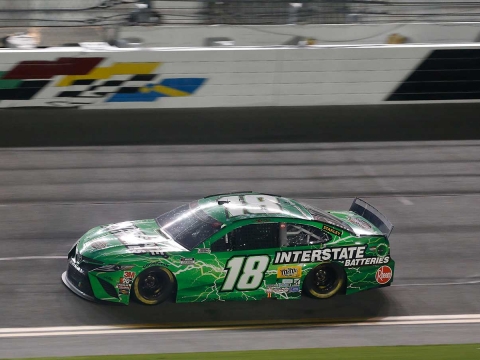