HUNTERSVILLE, North Carolina (Oct. 26, 2021) – This Sunday is a notable day for Kyle Busch for a couple of reasons. Of course, Busch’s main focus is on Sunday’s Xfinity 500 NASCAR Cup Series race a Martinsville (Va.) Speedway.

Busch, driver of the No. 18 M&M’S Toyota for Joe Gibbs Racing (JGR), will also use the opportunity to celebrate Halloween as the race happens to fall on Oct. 31, when he will sport the colorful candymaker’s special scheme for the second weekend in a row in celebration of M&M’S Halloween fun packs.

Along with his favorite chocolate candies, Busch is looking for something else to add to his Halloween treat bag following Sunday’s race at Martinsville, and that’s the traditional Martinsville grandfather clock trophy for winning at NASCAR’s shortest track. While the clock may be way too big for his treat bag, a win would be quite the treat as it would automatically qualify him for the season-ending Championship 4 at Phoenix Raceway next weekend. Busch knows the feeling well as he won at Martinsville in October 2017, qualifying him for the winner-take-all playoff finale. He currently sits fourth in the standings, just one point above the top-four cutline, heading into the final race of the Round of 8 of this year’s Cup Series playoffs.

The spooky-looking M&M’S scheme will race on Halloween at a place that used to challenge Busch at the start of his career, and in the early part of his 14-year tenure with JGR. Busch finished outside the top-10 in three of his first four Martinsville races with JGR in 2008 and 2009. Since then, Busch has scored 12 top-five finishes there and he hopes a 13th top-five with JGR Sunday will continue his championship hopes.

The beginning of the recent success at Martinsville for Busch and the M&M’s team came with the two-time NASCAR Cup Series champion’s first career win at the paperclip-shaped oval in April 2016. Not only did he bring home his first Martinsville clock, he did it in dominating fashion, leading five times for a race-high 352 laps en route to victory lane. He added a second career win there in 2017.

All season long, Busch and his team have never backed down from a challenge. Two brushes with the wall last Sunday at Kansas Speedway in Kansas City led to a disappointing 28th-place finish. Even with that result, Busch sits in the final transfer spot to the Championship 4 in a very tight battle where fourth through seventh in the standings are separated by just seven points. Only Kyle Larson – who won the first two races in the Round of 8 – is locked into the Championship 4 next weekend, leaving three spots at Phoenix up for grabs at Martinsville.

This year M&M’S is bringing Halloween celebrations to communities around the country, partnering with organizations such as Boys & Girls Club of Charlotte, and providing activities, costumes and, most importantly, candy for the families they work with. Busch and some of his No. 18 team spent time packing a race-themed package for kids at the Boys & Girls Club, which of course included some M&M’S candy for the Halloween celebration.

So, as the season heads into the homestretch, Busch and the M&M’S Halloween team know that, when it comes to being championship-eligible at Phoenix, they’ll need to take advantage of the confidence they’ve built at Martinsville since 2015. Buoyed by already having conquered the .526-mile short track in Southern Virginia multiple times in recent years, Busch hopes to add a punched ticket to the championship race at Phoenix to his treat bag by the end of Sunday’s 500-lap marathon, in addition to M&M’S goodies and the traditional grandfather clock, of course. 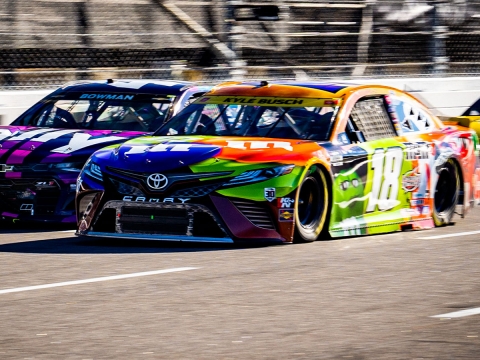 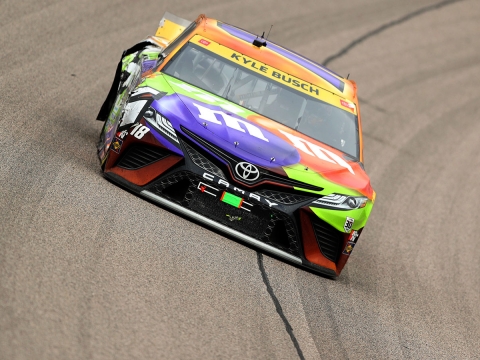