What a Difference a Year Makes

HUNTERSVILLE, North Carolina (Sept. 28, 2021) – When looking at the NASCAR Cup Series playoff standings, Kyle Busch sits in a much different position than he did one year ago.

Busch, driver of the No. 18 M&M’S Toyota for Joe Gibbs Racing (JGR), earned 22 playoff points during the regular season, and while the first round of the playoffs was not what he had hoped for, the Las Vegas native started the Round of 12 much closer to how he’s run all season. In fact, not only did Busch bring those previous playoff points into the 2021 Cup Series playoffs, but with 18 stage points and a strong third-place run at his hometown Las Vegas Motor Speedway last weekend, Busch finds himself with a 35-point cushion over the eighth-place cutoff position.

Contrast this to Busch’s position one year ago, when he sat eight points below the cutline. However, the most unpredictable track in the playoffs is looming this weekend as the NASCAR Cup Series heads to Talladega (Ala.) Superspeedway for Sunday’s YellaWood 500. Busch and his fellow competitors know the racing outcome at the mammoth, 2.66-mile high-banked oval is more of an unknown than any of the others on the schedule. Busch has found fortune there, both good and bad. With lessons learned from his now 17-season career, the two-time Cup Series champion knows anything can happen at Talladega.

With Busch’s strong third-place finish at Las Vegas last weekend, he and his M&M’S team know that every point matters in the NASCAR playoff format. He maximized his stage points at Las Vegas and has a much more optimistic outlook heading into Talladega than one year ago. Still, nothing is a given at a place like Talladega. So far, only JGR teammate Denny Hamlin, by virtue of his win at Las Vegas, is guaranteed a spot in the playoffs’ Round of 8. At Talladega, one lap, or even one corner, could change a driver’s fortunes one way or another, and quite quickly.

Busch has conquered Talladega just once in his career, his lone win coming in April 2008. In his 32 starts at the track, he has 13 other top-15 finishes, and six outings that ended in an accident. So, the Las Vegas native knows the winner of Sunday’s 500-mile race will need to have a strong car and some good fortune at NASCAR’s longest track. If Busch could bring home a solid finish, it could bolster his chances of making it to the next round of the playoffs following next weekend’s race at the Charlotte Motor Speedway Roval.

So, as Talladega looms, Busch hopes to stay out of the chaos with his M&M’S Camry, then head to Charlotte the following week with a shot at advancing in the tightly contested Cup Series playoffs. 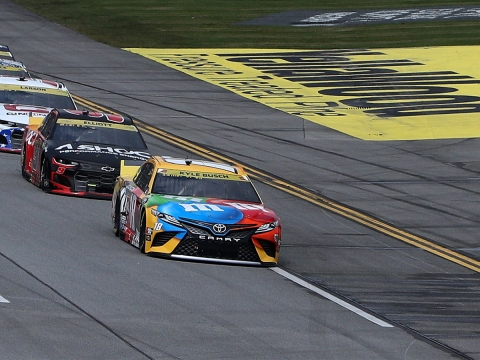 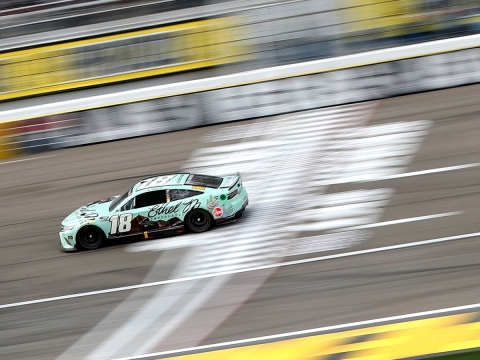