HUNTERSVILLE, North Carolina (Feb. 19, 2020) – Anytime one visits Las Vegas, the hope is to get “white hot” and bring home some extra money once it’s time to leave.

For Kyle Busch, driver of the No. 18 SNICKERS White Toyota for Joe Gibbs Racing (JGR), he’s hoping to get white hot on the 1.5-mile Las Vegas Motor Speedway oval, which could help him leave Las Vegas a winner.

After all, he’s a Las Vegas native and crossed off an all-important hometown win in 2009 in just his fifth NASCAR Cup Series start at his hometown track, site of Sunday’s Pennzoil 400. This weekend, Busch looks to bring home career Cup Series win No. 57 to add to his growing list of accomplishments.

The 2002 honors graduate of Durango High School in Las Vegas would like to double his number of Cup Series wins at the desert track after having brought home that emotional first win there 11 years ago.

Driving the yellow M&M’S Toyota that day, Busch qualified on the pole but was forced to start at the rear of the field because the team needed to change engines during Friday practice. Unfazed, Busch remained patient on race day as he and the M&M’S team worked their way to the front of the field by the 54th lap. Busch went on to lead three times for 51 laps en route to claiming what he called at the time the biggest win of his young career.

This weekend, well before he competes in Sunday’s Cup Series headline event in the SNICKERS White Camry, Busch will have his sights set on winning multiple times during the weekend as he’ll run his Late Model on Thursday at the Las Vegas “Bullring,” the NASCAR Gander RV & Outdoors Truck Series on Friday night on the 1.5-mile oval, and of course try to bring home another win in NASCAR’s top series Sunday afternoon.

Busch’s new scheme this weekend with the SNICKERS® Brand on board reintroduces a favorite twist on the brand’s iconic chocolate bar with SNICKERS® White. SNICKERS White features the same delicious ingredients of the beloved bar – including the same peanuts, nougat and caramel – but fully covered in rich, white chocolate. SNICKERS White had previously been sold for only a limited time, but it’s recently returned to shelves as a permanent addition to the SNICKERS portfolio.

While Busch has Xfinity Series wins in 2016 and 2019 and Truck Series wins in 2018 and 2019 to go with his 2009 Cup Series win on the intermediate oval, he already was no stranger to winning on Las Vegas Motor Speedway property. From 1999 to 2001, he earned more than 65 wins in Legends cars while racking up two track championships at the Bullring, which existed for several years before the NASCAR track was built. When Busch moved up to Late Models, his winning ways continued with 10 victories at the Bullring in 2001.

So as he returns to Las Vegas this weekend, Busch looks to get white hot while adding more Vegas trophies to his extensive collection of hardware at a place that means so much to him.

What would it mean to you to take home a couple of checkered flags this weekend?

“It would certainly be special to win there. I love going out to Las Vegas. You want to win any weekend, but especially when it’s in your hometown and you remember this track being built from the ground up and the hole being dug in which it sits right now. I was able to win in the Truck Series and Xfinity Series there last year and hope we can keep the momentum from last year and win again and, of course, win the Cup race, as well. I’ve just never been on the newer surface. On the old surface, I’d finish second or third every time I went there. It would certainly be special to close it out and to win a triple in your hometown. That would be pretty awesome. Hoping we can be one of the teams to figure things out and bring home a win with our SNICKERS White Camry.”

During the two races last year in Las Vegas, did the racing get better from the start of the year to what we had, and how do you feel about the package, now?

“I don’t know. I didn’t go back and watch the races on television, so just from my seat, from my vantage point, I thought they were pretty similar. To me, it just seems, though, that when your car is really, really good, when it’s more perfect, you’re more gone – know what I mean? Like the 19 (Martin Truex Jr.), for instance, he ran down the 4 (Kevin Harvick) car, was able to catch him and then drove away to the finish. And when I got back in traffic early in the race – I started back in traffic – I was really, really loose and hit the wall and everything else and we got it repaired and got it where the car was really, really good and really good balance. And then I could drive up through the field and got all the way to fourth and was probably going to run about third. But there was like one run where we passed everybody, and so I felt that same way I think it was the year before that when I drove through the field in one of the runs during the race, as well. To me it’s pretty similar. I don’t notice a whole lot of difference.”

Is there more pressure racing at your hometown track?

“Yeah, Vegas always means a little bit more pressure – more pressure on myself – just because it’s the hometown and you want to win there. Thankfully, I have won there and I’ve knocked that one off the list, but certainly you want to win there every year. I love Vegas, the atmosphere and everything going on around that place. We’ve run up front there the last couple of years, so I would like to get our SNICKERS White Camry back in victory lane there.”

Having grown up in Las Vegas, do you still have a lot of friends in the area? Do you get a lot of ticket requests from friends and family?

“I get a lot of ticket requests for California, Vegas and Phoenix – all the West Coast stops that we run. It’s kind of hard to fulfill all of them, but we try when we can. We get to go to M&M’S World on the (Las Vegas) Strip to sign some autographs, so I’m looking forward to seeing some of the hometown fans there, as well.” 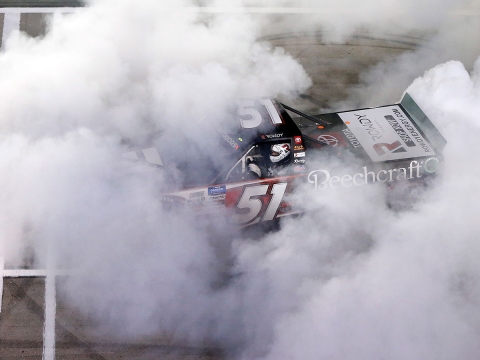 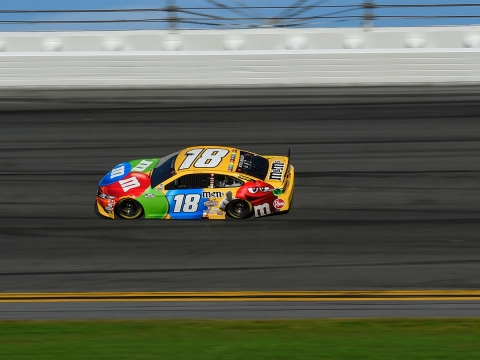