HUNTERSVILLE, North Carolina (Oct. 1, 2020) – Each January, the National Football League opens its playoffs with what is called “Wild Card Weekend” as four teams that did not win their division but still earned playoff berths get the chance to advance toward their ultimate goal – a Super Bowl championship.

This weekend, the NASCAR Cup Series heads to Talladega (Ala.) Superspeedway for what has come to be known as its annual playoff “Wild Card Weekend,” but for a vastly different reason than its football counterpart. It’s the racetrack – Talladega’s mammoth, 2.66-mile high-banked oval where Sunday’s YellaWood 500 will be contested – upon which the racing outcome is more of an unknown than any of the others on the schedule.

Busch, driver of the No. 18 M&M’S Toyota for Joe Gibbs Racing (JGR), has found fortune both good and bad during NASCAR’s version of wild card weekend. With lessons learned from his now 16-season career, the two-time and defending Cup Series champion knows anything can happen at Talladega.

With Busch’s sixth-place finish at his hometown Las Vegas Motor Speedway last weekend, he and his M&M’S team know that every point matters in the NASCAR playoff format, as he sits just nine points below the eighth-place cutline, and nothing is a given at a place like Talladega. So far, only his older brother Kurt Busch, by virtue of his win at Las Vegas, is guaranteed a spot in the playoffs’ Round of 8. At Talladega, one lap, or even one corner, could change a driver’s fortunes one way or another and quite quickly.

Busch has conquered Talladega just once in his career, his lone win coming in April 2008. In his 30 starts at the track, he has 13 other top-15 finishes, and five outings that ended in an accident. So, the Las Vegas native knows the winner of Sunday’s 500-mile race will need to have a strong car and some good fortune at NASCAR’s longest track. If Busch could bring home a solid finish, it could bolster his chances of making it to the next round of the playoffs following next weekend’s race at the Charlotte Motor Speedway “roval.”

So, as NASCAR prepares for its version of “Wild Card Weekend” at Talladega, Busch hopes to stay in front of the chaos with his M&M’S Camry, then head to Charlotte the following week with a shot at advancing in the tightly contested Cup Series playoffs.

How will you and the team approach this weekend at Talladega?

“I’m just going to do what I’m told to do. I’ve been in front and been a part of a wreck and I’ve been riding in the back and been taken out, too. There’s really no place that’s safe. With this race being the second race of the round, you have to try and run up front and hope that you don’t have some bad luck and just bring home a solid finish. We’ll do the best we can this weekend with our M&M’S Camry and see where the points fall for us afterward, then focus on what we need to do at the roval.”

Do you try and duplicate what worked at Talladega before?

“Yeah, I think so. I mean, there are obviously times when you feel like you want to push hard and go get a win or go get a better finish than where you’re currently running. But, you know you’ve just got to do what you can in order to let these races kind of fall into place, and sometimes it’s just worth taking the finish that’s coming to you and moving on and going to the next one. It doesn’t always help to push too hard, either, at times. There’s a balance there, for sure. It can also help to just sit back, relax and finish where you can, so we’ll see how it plays out for us. In the June race there, we had a strong car and ran up front, but just didn’t have enough Toyotas running up front at the end to get any help. That’s what it comes down to a lot at Talladega, getting the help from your teammates, since it’s hard to do that on your own.”

Do you change how you view Talladega from the first race to the second race because it is in the playoffs?

“Not really. For us and where we’re at, we don’t have anything to lose. We have to go race. We can’t just sit there and ride and protect a cushion like we have been able to do in the past. We’re going to be on the outside looking in, so we have to go for broke and do all we can do to get those stage wins and points and try to get a race win to automatically punch your ticket to the next round. We have been good at the superspeedway races so far this year, but none of them have turned out to be great finishes. Really feel like we had a shot at all three of those races at Daytona and Talladega earlier this year and hope we can have another shot again this weekend with our M&M’S Camry.”

Do you prefer being an underdog, or the guy with a target on his back?

“I don’t know. Certainly I guess I look back to 2015 and we were kind of the underdog because people just didn’t think we should be there and didn’t think we should be eligible because I had to miss 11 weeks because of my injuries. But then we were able to win our way into the playoffs and be in the top-30 in points and all that, so we met all the requirements. We went into that last race with the underdog mentality like, ‘Hey, however we come out of this, it’s great. We were here, we were in the final four, that’s cool.’ Then last year, kind of the same thing. We weren’t on a winning streak or anything and we kind of flew under the radar. We were an underdog, if you will, at the final race and we won again. If that’s what it takes to win these things, then sure, sign me up. Put me in that underdog spot and let’s go get it done.”

“The key there is to somehow stay out of trouble. At Talladega, you pretty much stay around the bottom since there is a lot of grip there, and you can pretty much run wide open every single lap. Everyone can run up on top of each other. When you get single-file at the bottom, sometimes it’s hard to get a lane on the outside with enough good cars to get something going. It can be frustrating at times because of that. It also seems to still put on a good race each time we go there. If you can be a contender and stay in line on the bottom, you can make it a pretty easy and safe race. Normally, guys are not content doing that, so that’s when it starts to get crazy.” 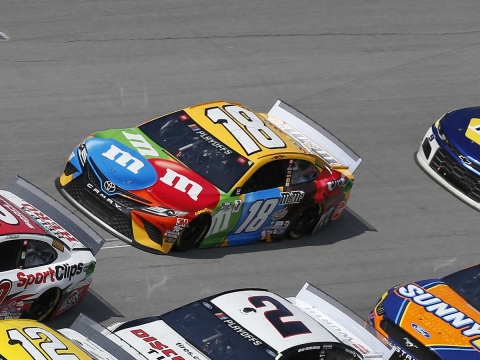 Race Recap for the YellaWood 500 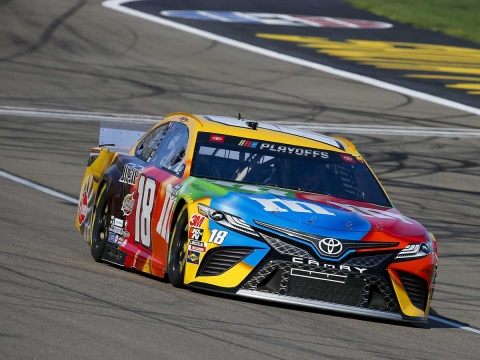