Richmond (Va.) Raceway, site of Saturday night’s Toyota Owners 400, is yet another place where Busch has shown a propensity to find victory lane. Busch swept both 2018 races and is a winner of six Cup Series races at the .75-mile short track while also owning a head-turning average finish of 6.9 in 27 career starts.

While Busch will bring back the familiar yellow M&M’S scheme to the track at Richmond this weekend, he’ll be bringing attention to three, brand-new, limited-edition flavors as part of M&M’S third Flavor Vote campaign: Mexican Jalapeño Peanut, Thai Coconut Peanut and English Toffee Peanut. The new flavors are on sale at select retailers nationwide, where fans can purchase and try each new flavor and cast a vote for their favorite once a day until May 17.

By voting in this year’s M&M’S Flavor Vote, fans will be entered for the chance to win a trip to all three countries that inspired the new flavors: Mexico, Thailand and England. Fans can try each new flavor and cast a vote online at http://www.flavorvote.mms.com, or text the word “Vote” to 84444 and follow the instructions in the reply text messages. After voting closes May 17, the flavor with the most votes will be announced in August.

Back to the task at hand this weekend, a quick look at the Richmond stat sheet for Busch can easily make the case he is most consistent at the .75-mile short track in Virginia’s capital city. Along with four series wins there, Busch has amassed 15 top-five finishes and 18 top-10s in 27 career starts there.

Additionally, the Las Vegas native is tops among active drivers with his aforementioned average Richmond finishing position of 6.9. Next best is Kevin Harvick’s average finish of 8.1. Busch has completed all but one of the 10,829 laps available to him in his 27 Richmond starts. Of those laps completed, Busch has run in the top-15 for 9,602 laps, or 88.7 percent, which ranks second among active drivers.

Saturday night, Busch and the M&M’S team look to get back to victory lane at Richmond where, in addition to last year’s sweep of the spring and fall races, Busch also won four consecutive Cup Series spring-race wins from 2009 to 2012, besting Richard Petty’s previous record of three Richmond spring-race wins in a row from 1971 to 1973. With those impressive statistics and records to back him up, it’s little wonder that a visit to the “Capital of the Commonwealth of Virginia” is one of Busch’s favorite stops on the NASCAR tour.

Busch will look to post back-to-back victories for the second time this season as the 2015 Cup Series champion won back-to-back races earlier this season at ISM Raceway near Phoenix and Auto Club Speedway in Fontana, California. Busch has set the high-water mark for the series thus far with a series-high three victories while also scoring top-10 finishes in each of the eight races contested thus far.

So, as the series heads to Richmond for the first time this season, Busch and the M&M’S team look to bring home their seventh win there together. While M&M’S fans will be choosing a winner between Mexican Jalapeño Peanut, Thai Coconut Peanut and English Toffee Peanut off the track, Busch will look to continue his winnings ways on it.

What are your thoughts going into Richmond this weekend?

“I always looking forward to Richmond. Obviously, last year was really good for us there, even though we didn’t have the best car there in the spring, Adam (Stevens, crew chief) and the pit crew guys were able to put me in a good position to win and we capitalized on that, as well. Certainly want to keep the momentum rolling from last week and really the start of the season for us, keep that top-10 streak going, too. We’ve got the M&M’S Flavor Vote on the agenda this weekend at Richmond since they are sampling to fans and hoping they get a chance to try all three flavors – Mexican Jalapeño Peanut, Thai Coconut Peanut and English Toffee Peanut – and get on flavorvote.com to vote for their favorite. Of course, hoping we can put the M&M’S Toyota in victory lane at the Toyota Owner’s 400 and make it three wins in a row there, as well.”

“Richmond is getting a little trickier, it seems like, just with the asphalt kind of getting older and the way the cars are. The consensus at Richmond is, of course, just trying to get your car to turn, but also having really good forward bite. You have to be able to get off the corners at Richmond. You have to have good brakes, as well, and be able to turn the center. All of it correlates. Everything you want as a racecar driver, you’ve got to have most all of it and, if you don’t, then you better hope you have more forward bite than the rest of them. That’s sort of the equation of Richmond. It’s a fun place to race. It’s really cool. As a driver, you wish it could widen out and give you more options of being able to run around in different grooves, but it hasn’t shown us that the last couple of years. We’re hoping to get our M&M’S Camry back to form there. We were very good last spring, but we’d like to get another victory there, for sure.”

“I love Richmond. It’s one of my favorite racetracks and one of my best racetracks. I love being able to go there and, of course, we put on some pretty good races there. We won four spring races in a row and both races last year, so that was cool. It’s a neat racetrack and it’s certainly an excitement track and there is a lot of action that happens there.”

Can you compare Bristol and Richmond?

“There’s really no comparison between racetracks, honestly, because Charlotte, Texas, Atlanta – they all look the same from overhead, but they all drive not even close to the same. Richmond and Bristol are more than oil and water, more than day and night. Bristol is an attack-type racetrack yet, when you attack, you can get yourself in trouble. Richmond is a very methodical racetrack and you have to be very – you’re very on edge there all the time, especially corner entry, getting into the corners. You’re always loose there and you have to be able to be loose there in order to carry the speed through the middle and have good drive off. We’re back to two night races at Richmond again and sometimes nighttime just feeds itself with not as much grip and makes it to where the bottom is the preferred lane. Daytime allows the racetrack to widen out and be hotter where, on a cooler racetrack, you’re looking for where the rubber is for at least a little while until the whole track rubbers in, and then you have to go back to the bottom, anyway.”

Do you enjoy the atmosphere at Richmond?

“I think the coolest thing about Richmond is the atmosphere they have there with all the fans really getting into it. People love coming there and supporting that racetrack. It’s been around for a long time. It’s a fast racetrack. It’s only a three-quarter-mile oval but it has really high speeds that makes it fun for us drivers and makes excitement that’s fun for a fan. Martinsville is a short track and it’s slow, but Richmond is pretty quick.” 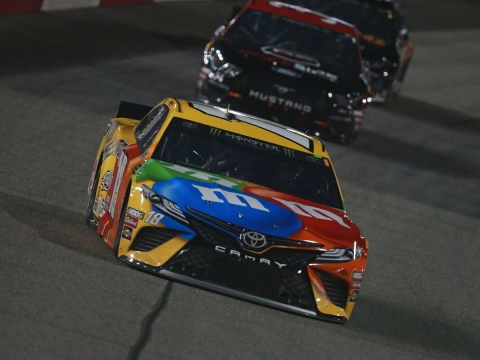 Race Recap for the Food City 500 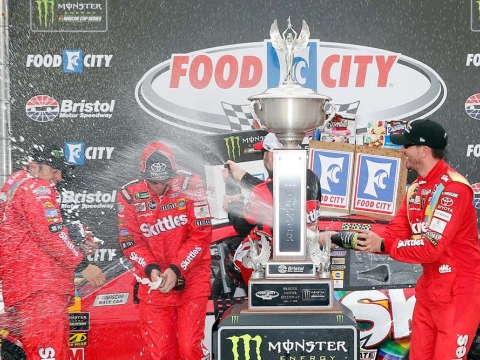